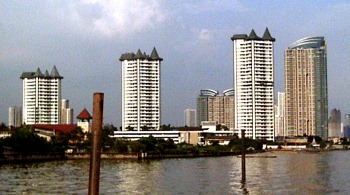 The condominium market will continue rising and reach its peak from 2015 onward as the Asean Economic Community allows more expatriates to work in the services sector in the country, says Issara Boonyoung, president of the Housing Business Association.

The far-reaching liberalisation pact will open up opportunities for regional investors to hold more than a 70% stake in service businesses in Thailand, and will allow more mobility of foreign workers.

“Foreign chambers of commerce in Thailand are pushing for the extension of the residential leasehold period to over 30 years,” Mr Isara said. “This will reverse shrinking foreign demand in properties.”

via Bangkok Post : Condo market to expand as Asean unites.

The condominium market continues to be the star performer in the Bangkok real estate market with new launches and supply continuing to register record growth. This was the main conclusion of the latest Bangkok Condominium Market Report from Colliers International Thailand for the first quarter of 2010.

“We have witnessed another bumper quarter for the condominium market in Bangkok, a welcome state of affairs amid the continuing uncertainty clouding other property sectors” stated Dr. Patima Jeerapaet, Managing Director of Colliers International Thailand.

It was not only launches that made the news this quarter. “This year is likely to see the largest completion of new supply since 1997 with an estimated increase of just over 30,230 units compared with approximately 27,430 units in 2009” pointed out Mr. Surachet Kongcheep, Manager of Research & Advisory for Colliers International.  About 6,940 units were supplied in Q1 2010.

The Thai real estate industry has grown significantly since the 1997 financial crisis. Although speculation is prevalent in some sectors, we have not experienced a 1997 bubble-like boom. Generally, a real estate bubble occurs when property prices rise quickly in a short period, primarily from speculation – resulting in a supply-and-demand imbalance. When property prices are rising faster than the cost of money and banks continue increasing loan-to-value ratios, funding becomes easier – propelling additional speculation.
Being a developing country, the cost of property in Thailand is much lower than in the more developed European markets. But, on the other hand, prices for Thai property, in general, are rising at a much faster rate.

The severity of the global financial crisis also saw the government introduce additional sweeteners for buyers — a 300,000-baht income tax deduction for any buyers of a new home that was transferred within 2009. At the same time, mortgage interest that could be deducted from taxable earnings was increased to 100,000 baht from 50,000 and has now become a permanent tax benefit.

The majority of condominium sales were from local buyers. In the first quarter of 2010, there were about 14,000 newly launched units. Those selling well were along the BTS and MRT. Well-known developers retain an obvious advantage in sales. The best-selling condominiums were mostly grade B to C, he said, because Grade A is usually for foreign buyers or expatri­ates already in Thailand.