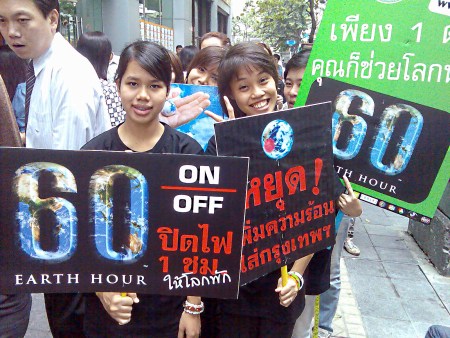 Energy utilities chiefs from Asean countries expressed their concern about energy security and climate change, with an agreement to accelerate the promotion of clean coal technology and the development of nuclear power, among other initiatives.

Thailand is the home to 65 million people, the majority of whom live in rural, agricultural areas.  The country is the world’s largest exporter of rice, and is often called “the rice bowl of Asia.” Agriculture employs 49% of the population and contributes 10% of GDP.  Tourism and fisheries abound on Thailand’s 3,200 kilometers of coastline and play important roles in the economy, providing 6% of GDP and a livelihood to 10% of the population.  The capital city, Bangkok, is home to 15% of the country’s population and serves as the economic, political and social center not only for Thailand but for the greater Mekong region, giving it the status of a global city.  Climate change threatens all three important sectors of Thailand’s economy: agriculture, tourism, and trade.

The effects of climate change, including higher surface temperatures, floods, droughts, severe storms and sea level rise, put Thailand’s rice crops at risk and threaten to submerge Bangkok within 20 years.  The damage to agriculture, coastal tourism, and the capital city as consequences of climate change will have enormous economic, cultural and environmental impacts: one degree of warming will destroy the rice crops that are central to the economy, and a few centimeters of sea level rise will submerge the capital city and devastate coastal tourism.  Thailand’s mitigation and adaptation efforts include a slow shift to organic agriculture, a tsunami warning system along the Andaman Sea, the construction of a flood prevention wall around Bangkok, and an Action Plan to reduce greenhouse gas emissions from vehicles and energy use.

Tax and excise incentives by the Thai authorities encouraged domestic sales of pickups at the expense of cars, and pickups still amount to almost three-fourths of current output. The cost of local labor appears to amount to just 5 percent of the value of output, half the level in the U.S., likely reflecting much lower wages and the high labor component of imported electronics in Thailand. Thanks to the relocation of pickup producers to Thailand, and the spillovers into car manufacturing, automotive production has surged in the past decade, rising from about 145,000 cars in 1998 to 1.4 million in 2008, establishing Thailand as the largest automotive producer in Southeast Asia and the largest producer of light pickup trucks in the world.

Thailand’s future in the face of climate change remains uncertain.  Like many countries, it contributes to global warming through energy use and agriculture.  Like many other countries, it feels the environmental, social, and economic impacts of floods, droughts, and severe storms.  Thailand’s mitigation and adaptation efforts, such as the Action Plan to reduce greenhouse gas emissions, the flood wall to protect Bangkok, and the King’s technology to create artificial rain, could be replicated by nations with similar climate scenarios.  Likewise, areas with high risk of tsunamis or other natural disasters can learn from Thailand’s devastation and act now to prevent extreme damage from storms.  Thailand is exceptionally vulnerable to small changes in climate: slightly warmer surface temperatures will destroy the rice crops that feed the population and bolster the economy, and a few centimeters of sea level rise will submerge the capital city and devastate coastal tourism.  Changes to agricultural techniques and disaster prevention strategies will allow the country to maintain its economy and culture, and efforts by the entire world to reduce greenhouse gas emissions will help Thailand survive in a changing climate.