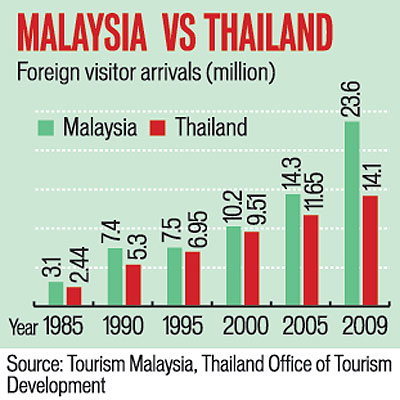 The outlook for tourism looks even more promising because of the positive effects of the free trade agreement that allows the free flow of goods, services, products, capital, investment, skills and labour between Asean countries.

However, if we compare Thailand’s figures to those of neighbouring Malaysia, which had 23.6 million tourist arrivals last year, they do not look so encouraging, bearing in mind that Malaysia covers 329,845 square kilometres (nearly half the size of Thailand), has a population of 28 million (less than half that of Thailand) and possesses similar resources.

Despite the political upheaval this year, tourist arrivals in Thailand reached a promising figure of 1.2 million in July, up from only 400,000 in May, according to the Office of Tourism Development. Arrivals for the whole year are expected to be 14.69 million, compared with 14.15 million last year, based on the Thailand Tourism Confidence Index conducted by Chulalongkorn University.

Malaysia is ranked ninth globally for tourist arrivals, according to the World Tourism Organisation. The figures in the chart show that Malaysia’s arrivals have increased markedly since 2005 while the numbers for Thailand have risen at a much lower rate. Information provided by Tourism Malaysia also reveals the following:

– Malaysia has been targeting new markets in the Middle East. Its number of Iranian tourists increased by more than 60% from 60,000 in 2008 to 100,000 in 2009. Tourists from Saudi Arabia and other Arab countries have been attracted by the similarity of religions, the availability of halal food and the promotion of the Ramadan holiday. Malaysia is reported to be the second-favourite destination after Egypt for Saudi tourists. Middle Eastern tourists have generated high revenues for Malaysia as they normally spend up to three times the amount of average tourists. Saudi tourists visiting Thailand dropped from 22,000 in 2007 to 14,800 in 2008 due to strained relations between the countries, while the number of Iranian tourists is not significant, with Iran still classified in the “other” category in Thailand’s tourist arrival forms.

Wages for manufacturing workers in Thailand lower than in China