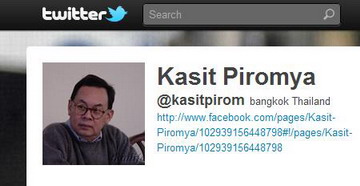 Foreign Minister Kasit Piromya has stressed that Thailand wants peace and has no reason to invade neighboring Cambodia upon the renewed Thai-Cambodian border skirmishes.

In his message on twitter, Mr Kasit explained that Cambodia was trying to incite the situation in order to bring the issue to the attention of the global community. He stressed that Thailand has no reason to attack Cambodia since it has been assisting the neighbor in many development projects.

The minister added that Thailand had already been satisfied with the use of bilateral mechanism in solving problems between the two countries. He however said the government will explain the situation to the global community and will revise assistance provided to Cambodia.

Thailand has no reason to attack Cambodia since it has been assisting the neighbor in many development projects, says Kasit in his latest Tweet

Mr Kasit pleaded in his twitter message, that Thai people stay united and send signals to Cambodia that Thailand does not want any more battles.

Prime Minister Abhisit Vejjajiva on Wednesday denied a Cambodian media report that Thailand has pulled out of planned ceasefire talks with Phnom Penh, saying Thailand’s defence minister postponed his trip to Cambodia due to his mission to China.

Mr Abhisit said Defence Minister Prawit Wongsuwon cancelled travelling to Cambodia for talks with his counterpart Tea Banh on Wednesday as he is busy on a mission to China from April 27-30. Talks with Cambodia will be rescheduled later.

Gen Prawit said before leaving to China that the Beijing trip was fixed earlier, and denied he was travelling to China to ask for help negotiating with Cambodia. Talks with Phnom Penh will be rescheduled once he returns from China, he said.