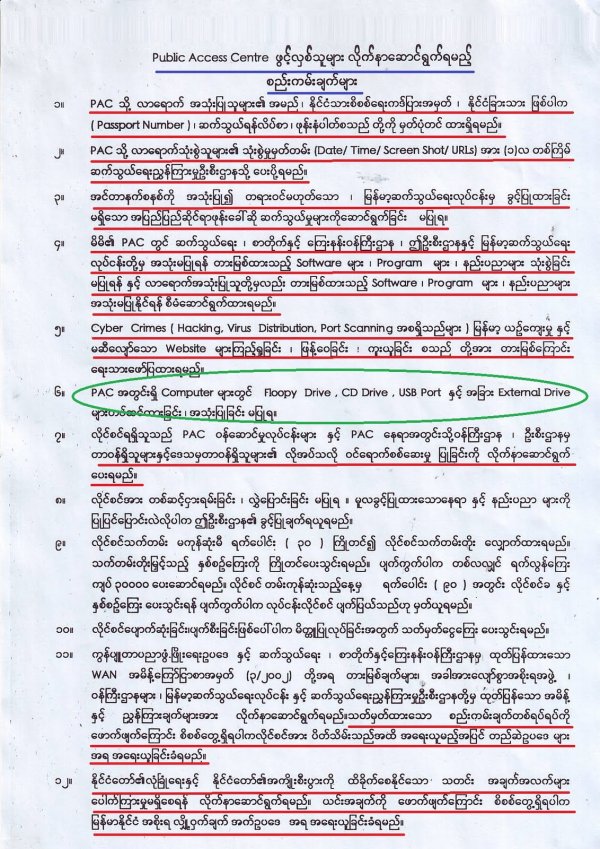 Australia and Thailand have called for Burma to raise its human rights record, including the release of all political prisoners, before taking up the chair of the 10-member Association of South East Asian Nations in 2014. The Burmese government generally grants amnesties to mark important national days. The last in 2009 freed 7,114 prisoners. Most recipients are petty criminals, but previous mass releases have usually included a handful of political detainees.

An amnesty had been expected when the country held its first elections in 20 years in November, when parliament convened in January, and then when the nominally civilian government was sworn in at the end of March.

Myanmar has announced the release of more than 14,600 prisoners under a clemency program that will include very few political prisoners.

Prison Department Director General Zaw Win said most of the convicts, including 2,166 women, would be freed from jails around the country.

“The government’s gesture will be welcomed by a great many prisoners in Burma, but for the 2,100 political prisoners unjustly serving sentences of up to 65 years, the one-year reduction is a sick joke,” said Elaine Pearson, Human Rights Watch’s deputy Asia director.

Burma, also known as Myanmar, has more than 60,000 prisoners in 42 prisons and 109 labor camps. They include more than 2,000 political detainees, according to the UN and human rights groups.

Burma had foregone its right to chair ASEAN in 2005 amid international pressure over its human rights record. Burma now points to political reforms since then, including general elections last year and the formation of a new parliament together with the release of opposition leader, Aung San Suu Kyi, from house arrest last year.

But human rights groups argue the parliament is largely controlled by the military and military backed parties, while more than 2,000 political prisoners remain in jails throughout the country and attacks on ethnic communities continue.

Surveillance of media and Internet stepped up under new civilian president

Reporters Without Borders learned last week that the Burmese government’s censorship bureau, called the Press Scrutiny and Registration Division (PSRD), has suspended the Rangoon-based weekly True News for two weeks – supposedly for misreporting a mobile phone offer by the Ministry of Communications, Posts and Telegraphs (MCPT).

According to the exile news outlet Irrawaddy, the MCPT objected to a report quoting its chief telecommunications engineer, Zaw Min Oo, as saying anyone who owned a GSM mobile phone, which retail for 1.5 million kyat (US $1,830), would be able to get a second one for just 50,000 kyat ($60). But a True News reporter who requested anonymity said other articles published by weekly were the real reason for the suspension.

At the same time, the MCPT has just sent a new set of rules to Internet cafés, which were already subject to draconian regulations imposed by the ministry, including a requirement to keep the personal data of all their clients along with a record of all the websites they visit, and make it available to the authorities.

Reporters Without Borders has obtained a copy of the directives, which were emailed to Internet cafés earlier this month. How they will be implemented is not always clear:

The new set of directives includes a ban on the use of portable hard disks, USB flash drives and CDs in Internet cafés, and a ban on the use of Internet telephony (VoIP) services to call abroad. The grounds given by the ministry is the need to protect the state’s income from international phone calls but it will isolate dissidents more and discourage Internet users from expressing themselves freely. Above all, it will affect users of services such as Skype, Gtalk, Pfingo and VZO, which are hard to monitor for the authorities.

Reporters Without Borders has obtained a copy of the directives, which were emailed to Internet cafés earlier this month. How they will be implemented is not always clear:

1. Personal information of PAC users such as name, National Registration Card number, passport number (if the user is a foreigner), contact address, telephone number etc. must be registered.

2. Service Records of all PAC users (date, time, screen shot, URLs) must be submitted once a month to the Directorate of Communication.

3. Utilizing Internet for international phone calls is prohibited as it is illegal and not permitted by the Department of Communication.

5. PAC users must be informed by means of written notice that cyber crimes (hacking, virus distribution, port scanning etc.) and viewing, copying and distributing of media that is not in line with Myanmar culture are prohibited.

6. Computers at the PACs are not allowed to have floppy drive, CD drive, USB port and other external drives.

7. PAC license holders are obliged to permit inspections by PAC service providers, and officials from the ministry and the directorate, and local authorities.

8. Leasing or transferring of PAC license is prohibited. Owners can apply permission from the directorate if they wish to change the location of PAC or technologies used.

9. Owners may submit application to renew PAC license 30 days prior to the expiry date. Renewal fee / annual fee has to be prepaid. Owners who failed to pay in time will be fined 30,000 kyats per every delayed month. License will be revoked if required payment is not made within 90 days.

10. In case of lost or damage of the original document (license), a copy of it may be issued against payment.

11. Computer Development Law must be observed and restrictions stipulated by Ministry of Post and Telecommunication’s WAN-order no. 3/2002 must be followed. Orders and instructions made by the government, ministries, Department of Communication and Directorate of Communication must be observed. Perpetrators will not only have their PAC license revoked but also be punished according to the existing laws.

12. Information that could harm State’s security and interest must not be leaked. Perpetrators who leak such information will be punished with State Secret Act.

At the end of 2010, the authorities gave themselves the means to cut off the public’s Internet access during any social or political crisis without having to disconnect themselves at the same time. A reorganization of Internet Service Providers, billed as major step forward, has enabled the authorities to increase online surveillance and repression while improving the quality of their own Internet connections.

Burma’s Internet legislation is long been one of the most repressive in the world. Under the 1996 Electronic Act, which covers the Internet, TV and radio, importing, owning or using a modem without an official permit is punishable by up to 15 years in prison as a “violation of state security, national unity, culture, the national economy, law and order.”

Burma is on the Reporters Without Borders list of “Enemies of the Internet.” Amnesty International puts the number of Burmese political prisoners at more than 2,200. They include 17 video journalists (VJ) employed by the exile TV and radio station Democratic Voice of Burma, which recently launched a campaign for their release with support from Reporters Without Borders.