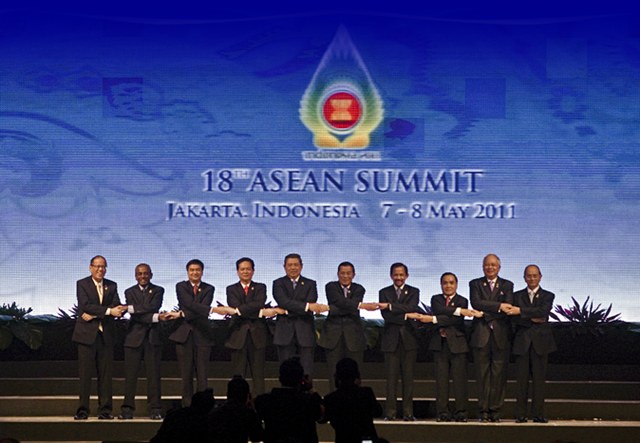 When Indonesia took the chairmanship of the Association of Southeast Asian Nations in January, it could not have asked for a more challenging task than to deal with the military clashes which have erupted between Thailand and Cambodia over a border dispute.

Not so long ago, Thai tourists were greeted by Cambodian military police officer at Preah Vihear temple. The temple is now off limits to tourists.

Jakarta had some grand designs when it asked Brunei to swap places for the right to chair the regional grouping as Indonesia’s turn was not due until 2013. But as Asean under Indonesia’s chairmanship forges ahead with the creation of an Asean Economic Community by 2015, the clashes on the Thai-Cambodian border are a reminder of the many territorial disputes among its 10 members that for much of its 44-year history have been swept under the carpet.

If Asean functioned as a single economic entity, it would be an “economic country” of 600 million people and boast a GDP of US$1.8 trillion. Indonesia, as the most influential Asean member, can use its weight and diplomatic resources to prevent the skirmishes from escalating. Photo: Peerapat Wimolrungkarat

Some border disputes are hard if not impossible to resolve, except through a war where one party wins and the other loses.

The overlapping territorial claim by both Thailand and Cambodia over the border region that houses the historic Preah Vihear temple is one such example. To both sides, this is a matter of sovereignty. Neither country is prepared to give up an inch of land, and both sides are prepared to go to war if necessary.

Many territorial disputes within Asean are the legacy of the European colonial rulers that carved the region according to their economic interests. In the case of Preah Vihear temple, however, it goes back centuries and predates European colonialism, making a solution to the problem extremely contentious.

While it may be unfair to judge Indonesia’s leadership of Asean in 2011 by how it manages the Thai-Cambodia conflict, given the near impossibility of finding a settlement that would satisfy both sides, it is still a blessing in disguise for the region that the clashes have happened under its watch.

If Asean functioned as a single economic entity, it would be an “economic country” of 600 million people and boast a GDP of US$1.8 trillion. It would be Asia’s third largest economy and a cultural and trading bridge between China, India, the Middle East and the Pacific. That is, in a peaceful environment of course.

via Bangkok Post : Territorial disputes must not derail AEC integration.
Prime Minister Abhisit Vejjajiva said that the Cabinet, during its meeting on 28 June 2011, discussed the issue after having acknowledged a report by the Minister of the Natural Resources and Environment, Mr. Suwit Khunkitti.

The Prime Minister said that he had assigned the Ministry of Natural Resources and Environment, the Ministry of Foreign Affairs, and the Ministry of Culture to study the draft resolution that Cambodia proposed as an option, although the management plan has not yet been considered at the session.

He said that the decision on the withdrawal was because Thailand would not want to take a risk, as it was a matter of sovereignty. The most important point was that Thailand was now able to stop the consideration of Cambodia’s management plan for the Temple of Phra Viharn. Mr. Suwit’s action was in line with the Cabinet’s resolution.

According to the Prime Minister, UNESCO Director-General Irina Bokova has sent a letter expressing her regret with Mr. Suwit’s declaration on Thailand’s intention to leave the 1972 World Heritage Convention. The letter said that the World Heritage Committee did not discuss the management plan of the temple, nor did it request for any reports to be submitted on its state of conservation. It hoped that Thailand would consider its future course of action in respect of this important Convention and would continue to be an active participant in the international cooperation for the protection of the world’s outstanding heritage.