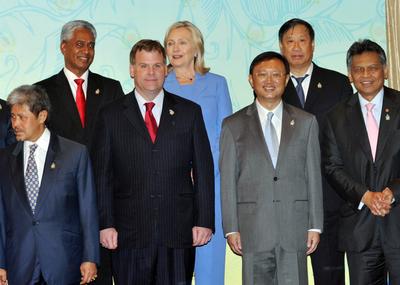 ASEAN’s function is often described as being limited to a ‘talk shop’ that merely provides venues where ministers and leaders from larger states join together to exchange views on regional security and economic issues.

So long as the so-called ‘ASEAN Way’ — which informally stipulates non-intervention, non-binding and consensus-based decision-making approaches to regional cooperation — is maintained, ASEAN’s major role will not go beyond hosting the ‘talk shop’. Yet the talk shop’s value could be enhanced if delegates discussed the hard issues, regardless of whether any binding obligations ensued.

First, the meetings were held in the midst of growing tensions between China and some ASEAN members, such as

Vietnam and the Philippines, over maritime territorial disputes in the South China Sea. And although China is yet to show any intention of making a compromise — insisting on bilateral negotiations with other claimants as the only way to resolve the disputes rather than utilising multilateral meetings such as the ARF to broker a resolution — the ASEAN meetings this year have confronted the issue in a more serious manner.

Second, the US’s increased engagement in Southeast Asia, including President Obama’s scheduled participation in the East Asian Summit (EAS) later this year, has given renewed significance to the ASEAN ministerial meetings. The Obama administration’s commitment to the region, epitomised by the slogan ‘The US is back in Asia’, is in sharp contrast to the apathetic attitude of the Bush administration as evinced by former US Secretary of State Condoleezza Rice’s two absences from the ARF in just four years. Through the Obama Administration and its participation in the ASEAN meetings we are seeing the first serious US engagement in Southeast Asia since the end of the Vietnam War.

Finally, the ‘talk shop’ provides an opportunity for Southeast Asian states to display leadership. This year Indonesia has assumed the chairmanship of ASEAN, and has been under pressure to host meetings successfully after failure to find a solution to the border dispute between Thailand and Cambodia undermined confidence in its leadership. That leadership will continue to be tested as Indonesia is set to host more meetings, including the EAS.

Prior to the Bali meetings, ASEAN had never successfully acted as an effective shield to protect the interests of its members in territorial disputes. However, the US, playing a key role in placing the disputes on the recent ARF agenda, has confronted China over the territorial disputes in the South China Sea. Of significance was the US claim that both parties should provide ‘legal evidence’ to support their territorial claims. This legal-based approach to the territorial disputes, initially promoted by the Philippines, is something China has previously not paid serious attention to.

The US engagement in Southeast Asia and its planned participation in the EAS this year have also helped settle another debate over Asian regionalism: arguments over the most effective framework for regional cooperation.