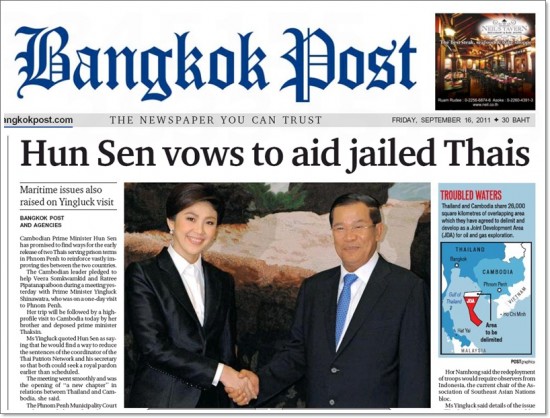 Thailand has emphasized the importance of confidence building among ASEAN countries and its commitment to developing closer relationship with all ASEAN member states.

ASEAN Heads of Missions to Thailand recently paid a courtesy call on Foreign Minister Surapong Tovichakchaikul, who stressed Thailand’s commitment to the realization of the ASEAN Community in the political-security, economic, and socio-cultural fields.

Minister Surapong also underscored the importance of connectivity and closer people-to-people relations, saying that Thailand hoped to see greater prosperity and peace in the ASEAN region. He noted that Prime Minister Yingluck Shinawatra had received a warm welcome during her visit to Brunei Darussalam on September 10 and Indonesia on September 12, as part of her familiarization trip to ASEAN.

Prime Minister Yingluck paid a visit to Cambodia on September 15 and the Lao People’s Democratic Republic (Lao PDR) on September 16. During her trip to Cambodia, she met Prime Minister Samdech Akkra Maha Senabodhi Techo Hun Sen and other senior Cambodian officials in the plenary session. Both sides believed that the visit marked a new era of Thai-Cambodian relations. They also agreed to abide by the temporary ruling of the International Court of Justice.

The Cambodian Prime Minister said that both sides would redeploy troops in the area, and the police and forestry officials would begin to take care of the area. The General Border Committee mechanism would be used to handle the issue and set the procedures and details in adhering to the temporary ruling.

Regarding the topic of disputed areas in the sea, both leaders agreed that discussions on the issue should be held officially and openly. The Thai side wished to submit this matter to the Cabinet for consideration. Both sides shared the view that they should step up cooperation in dealing with the problems of forest encroachment, flooding and illegal drugs. Prime Minister Yingluck expressed Thailand’s readiness to assist the development of basic infrastructure in Cambodia. Both countries would also push for the opening up of a permanent border checkpoint in Aranyaprathet-Stung Bot to accommodate the growing cross-border trade.

During her visit to Lao PDR, Prime Minister Yingluck discussed with Mr. Tongsing Tammawong, Prime Minister of Lao PDR, joint efforts in solving the problems of drug trafficking and illegal goods smuggling along the Thai-Lao border. Both countries pledged to look forward together as members of the ASEAN family.

Ms Yingluck also reaffirmed that Thailand would purchase 7,000 megawatts of electricity from Lao as earlier agreed in a memorandum of understanding. On this occasion, the Thai government presented 2.5 million baht to the Lao government to help flood victims.

via Inside Thailand — Thailand’s Focus on Confidence Building among ASEAN Countries.