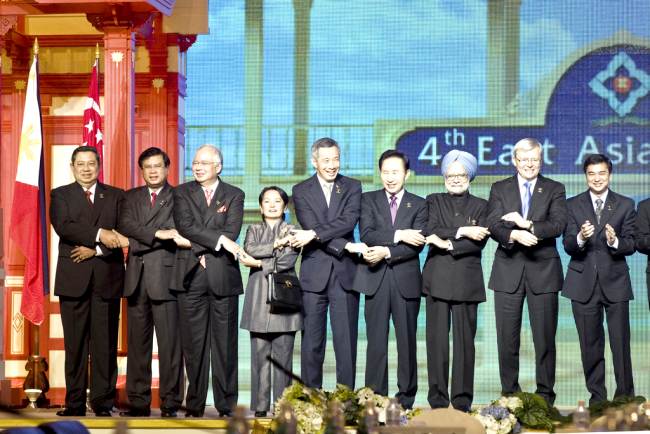 Observers of the Association of South East Asian Nations (ASEAN) and its regional integration process often grasp for analytical analogues.  Is ASEAN a developing supranational entity, like the EU?  Or is it only a loose grouping?  ASEAN is definitely not a proto-state, but it has progressed beyond an informal grouping, thanks to the recent introduction of the ASEAN Charter.

Although the Charter formalizes the rules and structure of ASEAN, it stops far short of the supranational aspirations of the EU’s Treaty of Rome.  The Charter provides ASEAN with legal personality but not with legal authority over its members. The ASEAN Secretary General has ministerial rank but can neither impose sanctions on members who do not comply with ASEAN measures, nor provide benefits to members who comply with ASEAN measures.  The Charter also does not provide any means for ASEAN nationals to invoke dispute resolution regarding ASEAN measures that affect them.

Rather, ASEAN can be likened conceptually to a league of sports teams which have decided to cooperate and institute common rules for operation and cooperation.  The Charter provides the newly formalized fundamental principles of the sport, with the various subsidiary agreements providing the more detailed rules for contests.  In this analogy, the ASEAN Secretary General operates the league office, organizing meetings and coordinating activities, but without the mandate to compel compliance among the members.  In this “league,” the team “players” (ASEAN nationals) have no ability to invoke league rules or to seek relief when rules are breached; that remains entirely the province of each team’s management (the ASEAN governments).

the limited role of ASEAN nationals in the operation of ASEAN institutions can result in frustration.

If ASEAN can be compared with a sports league, then its purpose is to promote its own popularity among potential “fans” (investors).   Standardized and improved rules and operation encourage more investment in ASEAN, and not in competitors such as China, Japan and the EU.    Similarly, better play and exciting matches encourage fans to watch the sports league in person or via television or the internet.

The difficulties in such an operation, where sovereignty remains with the teams’ management (ASEAN governments) and not with a “league office”, are both external and internal in nature.

In external matters, ASEAN has been able to act in a united manner.

In multilateral fora, ASEAN members coordinate, with the relevant ASEAN member representing the rest. For example, Indonesia speaks for ASEAN at the G-20.  In free trade agreement (FTA) negotiations, the ASEAN members coordinate as a group.  This occurred with the various FTAs that ASEAN negotiated and concluded with China, Korea, India, Japan and Australia/New Zealand.  Using the sports league analogy, this coordination effort resembles the negotiations between television networks and sports leagues for broadcast rights.

However, when the coordination among ASEAN members does not meet the expectations of others, this arrangement can break down. This occurred in the EU-ASEAN FTA talks, which the EU abandoned in favor of bilateral negotiations with individual ASEAN members such as Singapore.  The EU cited insufficient institutional development in ASEAN as necessitating the shift.  Again, resorting to the sports league analogy, this is akin to individual teams breaking away from the league committees and striking their own deals with television networks.
via AEC Blog.