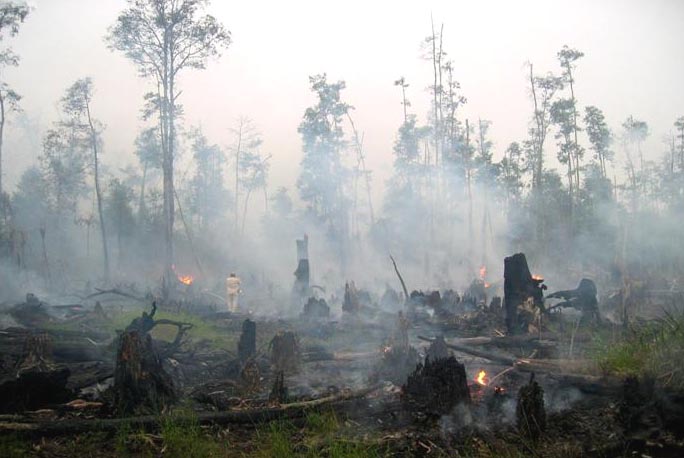 Last week the ASEAN environment ministers met in Bangkok to discuss, among other things, the haze (air pollution) that has become an annual blight on the region.

“The meeting accepted Malaysia’s proposal for the ASEAN Secretariat to play a more active role to coordinate monitoring activities, including the ability to decide when certain action is to be activated to reduce hot sports in member countries.”

He added that Singapore had supported the proposal, which was adopted by the ministers.

Now, as regular readers of this blog will know, I am in favor of strengthening the ASEAN institutions. Assigning responsibility to the ASEAN Secretariat to monitor both the haze and its causes and to determine when actions should be undertaken is a positive development. In fact, it is preferable to give this responsibility to the Secretariat, which can act in the interests of ASEAN, rather than any one member state.

Indonesia is largely responsible for the haze problem

The fact that the ASEAN Secretariat is based in Jakarta will also help, since Indonesia is largely responsible for the haze problem (with other ASEAN members also contributing with their own emissions).

However, this is only a partial step in the right direction. Several more steps must be taken in order for ASEAN to deal with the most visible and recurring transboundary issue, an issue that affects all three pillars of ASEAN.

The fact that the ASEAN Secretariat is based in Jakarta will also help, since Indonesia is largely responsible for the haze problem (with other ASEAN members also contributing with their own emissions).

The authority of the ASEAN Secretariat needs to be strengthened

Second, the authority of the ASEAN Secretariat in this matter needs to be strengthened. Not only would Indonesian ratification of the Agreement provide this, but so would an explicit commitment by ASEAN’s heads of state. An ASEAN Summit directive that the ASEAN Secretariat should have a continuing responsibility on transboundary haze issues would also give greater legitimacy to this task.

Finally, the ASEAN leadership needs to give the Secretariat the resources to implement that responsibility properly. Without additional funds and staff (such as through the secondment of national experts, which is done in the EU), the ASEAN environment ministers’ directive will become an unfunded mandate. It would be a great responsibility without any power. The fact that Malaysia and Singapore, two of ASEAN’s wealthier members, have pushed for action (and are most affected by the haze) hopefully will eventually lead to reform of the funding level and allocation formula for the ASEAN Secretariat’s annual budget.

Thus, ASEAN needs to follow up on its stated commitments with actions and follow-up. Although this will be difficult, failure to address the haze will remind ASEAN’s citizens and the world of the grouping’s failure to deal with a major regional issue.