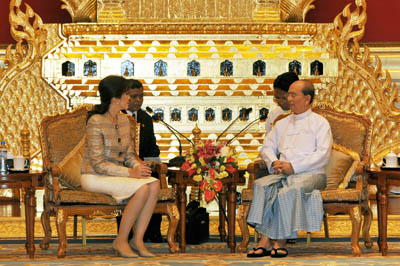 Thailand and Myanmar have agreed to strengthen bilateral ties and cooperation at all levels while exploring ways to develop new cooperation between the two members of the 10-nation Association of Southeast Asian Nations (ASEAN).

Thailand and Myanmar have agreed to strengthen bilateral ties and cooperation

During the visit, Ms Yingluck paid a courtesy call on Myanmar President Thein Sein before the two delegations met together.

The Thai premier praised Myanmar for the progress of its development of democracy and reconciliation. Ms Yingluck took the opportunity to invite Mr Thein Sein to visit Thailand.

Ms Yingluck assured the Myanmar leader that Thailand adheres to its policy of not allowing any armed group to use Thailand as its base to launch any offensive move against the Myanmar government.

Thailand stands ready to promote bilateral ties and cooperation at all levels and dimensions to jointly achieve the goal of establishment of the ASEAN Economic Community by 2015, the Thai prime minister said.

As for the cooperation between Thailand and Myanmar, both sides agreed to continue existing cooperation and, at the same time, to explore new ways to develop new cooperation.

Boost cross border trade and investment between the two countries

In an attempt to boost cross border trade and investment between the two countries and facilitate the cross border contacts, the Thai premier requested cooperation from Myanmar to reopen the border check-point at Tak’s Mae Sot-Myawaddy, closed since mid-July last year.

President Thein Sein agreed to speed up the process to reopen the checkpoint, as the bridge footings are under repair. The Myanmar government affirmed that once the bridge repairs were complete, the checkpoint would immediately reopen.

Trade and transport across the Mae Sot-Myawaddy border was suspended when Myanmar officials shut the border at the Thai-Myanmar Friendship Bridge across the Moei River and at over 20 cross-border trading ports along the river.

The Thai premier also asked for progress regarding the plan to upgrade the Singkhon border gate in Prachuap Khiri Khan province as a permanent border check-point to facilitate trade and transport.

Thailand expressed support for the development of infrastructure in Myanmar. Both leaders then witnessed an exchange of a signed road construction and improvement contract as well as for repairs of the Friendship Bridge. The contract was signed by the Thai and Myanmar foreign ministers.

via Thailand, Myanmar agree to strengthen cooperation at all levels.

Trade in Services May Present Greater Challenges to the AEC