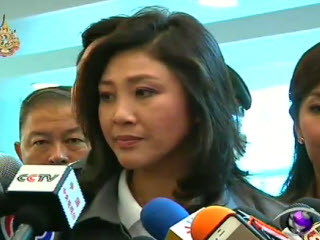 Thailand’s Prime Minister Yingluck Shinawatra on Tuesday said she has cancelled her plan to attend the Asia-Pacific Economic Cooperation APEC Summit Nov 12-15, saying she is obliged to focus on the flood crisis response at home.

Deputy Prime Minister Kittirat Na Ranong has been assigned to represent her at the Hawaii meeting, she said. However, the schedule to attend the Association of South East Asian Nations ASEAN leaders meeting in Bali, Indonesia Nov 17-19 remains unchanged.

Government spokeswoman Thitima Chaisaeng earlier told reporters that the prime minister would attend the 19th ASEAN Summit next week and she would use the meeting as arena to rebuild confidence among foreign investors on Thailand after the country has been severely hit by the flood crisis, which caused seven industrial estates and parks to close.Ms Yingluck will also take the opportunity to explain to the international community Thailands rehabilitation measures and assure foreign investors of her governments plan to support flood-affected foreign factories.

The flooding situation in Thailand is mainly affecting the central provinces along the Chao Phraya River including Bangkok and Ayutthaya. Other popular tourist destinations in the central region including Pattaya, Hua Hin, Kanchanaburi and Koh Chang have not been affected by the floods. Tourist destinations in the south of Thailand including Phuket, Krabi, Surat Thani, Koh Samui, Hat Yai and Phang-Na; and in the north including Chiang Mai, Chiang Rai and Sukhothai, also have not been affected by the floods.

Flood waters in Ayutthaya and some other central provinces have begun to subside, although many areas are not yet fully accessible. Tourist attractions in Ayutthaya will reopen once they have been restored.

Events relating to Loi Krathong, an ancient tradition that has been celebrated since the Sukhothai Era, will still take place in many locations throughout Thailand including Sukhothai, Chiang Mai, Tak, Hat Yai and Surat Thani during November 8 to 10. Some Loi Krathong events have been cancelled in Bangkok, Ayutthaya and Suphan Buri due to the flood.