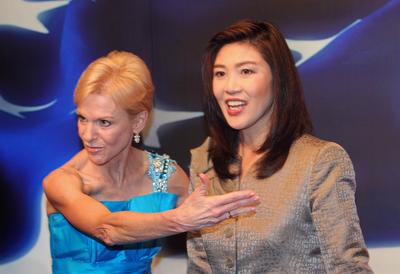 Thailand has elected female prime minister for the first time in its history.Yingluck Shinawatra and her Pheu Thai Party formed a coalition government of 300 seats in parliament.

Although Yingluck is yet to substantively comment on her foreign policy agenda, its orientation can be deduced from her ‘Thailand vision 2020’, announced before the election. The Vision 2020 clearly shows that the new government will likely have an outward oriented policy emphasising Thailand’s leading role in the international arena. It reinvigorates Thailand’s desire to be a regional hub for many activities, such as aviation, finance, health services and food production.

This policy vision is arguably identical to Thaksin’s foreign policy during his premiership. He promoted Thailand’s role in the region through the creation of a dual strategy based on both regional forums and a web of bilateral trade agreements. Yingluck underscored that ‘there is a lot of hard work ahead’, when the preliminary election result suggested her party had gained a majority.

At the regional level, Yingluck will need to restore Thailand’s role in ASEAN and beyond.

If Thaksin’s idea is influential in Yingluck’s foreign policy formulation, one thing we can expect from her government is attempts by Thailand to revive its influence in regional affairs. Its own version of regional and sub-regional initiatives (such as ACD, ACMECS and BIMSTEC) will be renewed. Thailand may also try to resume its active role in ASEAN, which has diminished since the coup in 2006. Such a move will only be possible if Thailand’s problems with Cambodia are resolved amicably and its attachment to democratic principles at home is proved sustainable.

Pongphisoot Busbarat is a research associate at the Department of Political and Social Change at the Australian National University.