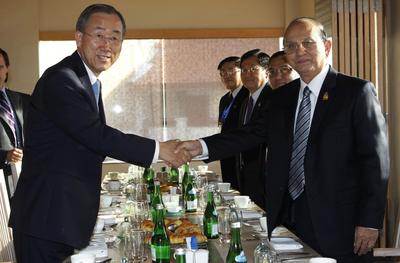 Even before the announcement that ASEAN member states had awarded the 2014 rotating chairmanship to Burma, it was already a foregone conclusion. Burma’s campaign to be reinstated as a regular member of ASEAN gained steam when Indonesia’s Foreign Minister, Marty Natalegawa, began hinting at approval before his visit to Naypyidaw, Burma’s capital, last month.

And once Indonesia was on board, other regional players joined in. Still, it is very uncertain what — if anything — ASEAN will achieve through this move.

Burma is the only current ASEAN member never to have chaired an ASEAN Summit meeting.

In 2004, regional powers — including Indonesia — pushed Burma to relinquish its chairmanship scheduled for 2006, acting under immense pressure from the US and EU. At the time, Burma was facing intense scrutiny for the circumstances surrounding Aung San Suu Kyi’s re-incarceration.

Leaders of major ASEAN dialogue partners refused to attend summit meetings convened by the Burmese military government. And they made the convincing case that it was in ASEAN’s best interest to back up the organisation’s talk of supporting human rights with punitive action on Burma. Indonesia, as a newly democratised power in ASEAN, was particularly keen to burnish its international credentials by playing into Western concerns about the impact Burmese chairmanship would have on ASEAN credibility.

Burmese officials began campaigning for the 2014 regional chair position earlier this year, in a widely recognised bid to accord the newly elected government a sense of legitimacy. Yet, although the new Burmese government has taken steps to rectify past mistakes in releasing scores of political prisoners and hosting several visits by US Special Envoy to Burma Derek Mitchell, Burma is still far from meeting international standards on political conduct.

Are these signs of progress enough to warrant any such move to grant Burma’s recycled leadership regional and global legitimacy? The short answer is, no. Despite Aung San Suu Kyi’s tentative support for the move, and a well-timed warning by Zay Htay, Director of Burmese President Thein Sein’s Office, these national leaders are playing their own domestic game. In his statement urging support for reinstating Burma in the regular ASEAN leadership rotation, Indonesian Foreign Minister Marty Natalegawa spoke passionately about moving forward. But Burma’s track record is depressing and ASEAN is exposing itself to a lot of risk by jumping into the fray of Burma’s domestic politics and international reputation.

So, why would ASEAN members support this move?

Western criticism of Burma over the years has been an obstacle to a stronger partnership with and within ASEAN. The US, particularly during the second Bush administration, did not want to be seen as sanctioning engagement with the country. Even the Obama administration’s decision to re-evaluate its behaviour with regards to Burma was a controversial one. So far, the US has rightly reiterated the need for continued Burmese progress on human rights and democratisation ahead of stronger ties with the US or the annulment of harsh sanctions. And although the putative meet is still more than two years away, even a surprise announcement that Secretary of State Hillary Clinton will visit the country in December does not guarantee that a US president would attend an ASEAN Summit in Burma in 2014.

ASEAN is gambling with the progress it has made over the past decade in consolidating its relationship with key dialogue partners and regularising its global interactions. ASEAN members may still decide that the organisation is now so central to Asian regional architecture that it is the US that cannot afford not to attend a meeting. But a decision by US leaders to boycott attendance for one year of ASEAN meetings is unlikely to destroy its relationship with the bloc, or to undermine ASEAN members’ interest in deeper bilateral partnerships with the US. In other words, the US has relatively little to lose.

It is a bit different for Indonesia. For years, ASEAN members have worried that the organisation would lose relevance over the coming years through the combined effects of a string of chairmanships by relatively weaker powers and China’s continued rise on the international scene.

As such, Indonesia was left to use its own chairmanship this year to lay out a coherent regional agenda through the implementation of the ASEAN Community in 2015. And as the emerging ASEAN mediator par excellence with Burma, Indonesia arguably has a decent shot at prying open its doors. But Indonesia’s reputation is becoming more bound up in Burma than ever before, and it may bear the brunt of international criticism for this collective naïveté.

In the lead up to 2014, ASEAN powers, like Indonesia, whose international reputations are at stake in this gamble may need to convince Western partners that expending additional political capital on Burma is worth the investment. Currently, that investment looks quite risky, but one can only hope it pays off, and is not the beginning of the end for enhanced regional unity and integration.

Julie Sheetz is a graduate student at Harvard University.

Continued here:
Burma: a test that ASEAN may be failing

Is ASEAN Moving too Fast With Burma?