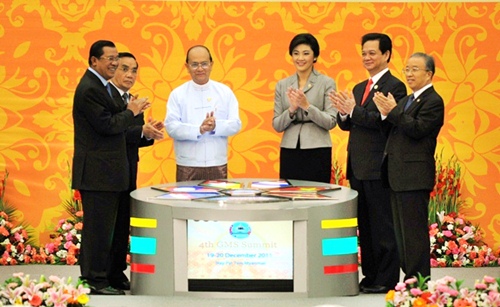 Prime Minister Yingluck Shinwatra has expressed Thailand’s strong support for the development of the Greater Mekong Subregion GMS, saying that Thailand regards the development as a major drive for the realization of the ASEAN Community.

The Prime Minister stated that economic development and capacity-building in GMS would contribute to the move toward realizing the ASEAN Community by 2015. The statement was part of her discussions with leaders of the subregion at the Fourth GMS Summit, held in Naypyidaw, Myanmar capital, on December 19-20.

Apart from Thailand, GMS also consists of Cambodia, China, Laos, Myanmar, and Vietnam. The six countries are members of the Association of Southeast Asian Nations ASEAN, which is striving to promote its community-building efforts for the integration of the region as a whole.

Prime Minister Yingluck said that Thailand had offered financial assistance for the construction of the third bridge across the Mekong River, linking Nakhon Phanom province in Thailand with Kammoune in Laos. It has also supported the construction of the Myawaddy-Kokarek road in Myanmar.The Prime Minister expressed Thailand’s readiness for expanding its railway linking with other GMS countries, especially Laos and China. Thailand also urged GMS to join forces in developing new economic zones, such as those located in Kanchanburi-Dawei, Nakhon Phanom-Kammoune, and Mae Sot-Myawaddy areas.Regarding cooperation with the private sector, she proposed that the GMS Business Forum be given a boost, so that it would be able to continue to work.

The potential of small and medium-sized enterprises should also be enhanced, and consultations between the public and private sectors should be held on a regular basis.She stressed the need for countries in GMS to cooperate more closely in dealing with climate change and threats from natural disasters. Prime Minister Yingluck said that investment in flood prevention and wastewater treatment systems should be part of urban development. Moreover, she said, communities should be empowered in order to enhance their capacity-building in disaster management.

During the Fourth GMS Summit, Prime Minister Yingluck represented Thailand in signing three important documents with other GMS leaders. The three documents included the MOU for Joint Action to Reduce HIV Vulnerability Related to Population Movement, the MOU on the Joint Cooperation in Further Accelerating the Construction of the Information Superhighway and Its Application in the GMS, and the MOU on the Establishment of the GMS Freight Transporters Association.Established in 1992, the GMS summit is held every three years.

via Thailand Regards the Greater Mekong Subregion as a Key to the Realization of the ASEAN Community.

ASEAN-Latin American Business Forum will be held in Jakarta next Feb.