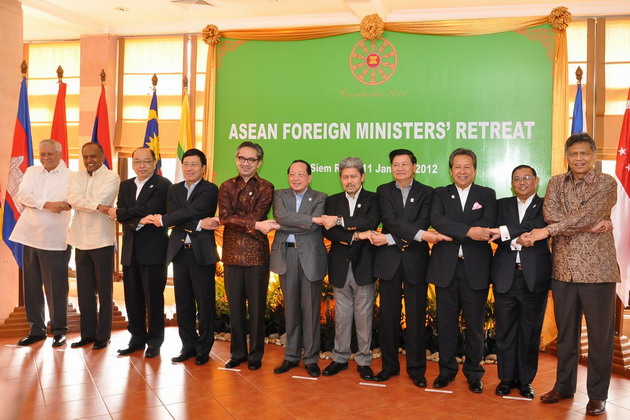 The Association of Southeast Asian Nations (ASEAN) agreed to encourage the United States and the European Union to end their sanctions against Myanmar, and expressed hope that the transition of leadership in North Korea would run smoothly, according to Thai Minister of Foreign Affairs Surapong Tovichakchaikul.

He told the media after the meeting that apart from following-up implementation of the 19th ASEAN Summit actions in Bali, the AMM Retreat also worked towards setting the direction to guide ASEAN this year under Cambodia’s chairmanship.

One issue widely discussed was the situation of Myanmar and Myanmar Foreign Minister Wunna Maung Lwin reported on his country’s progress after the general election on November 7, 2010.

Mr Surapong said Myanmar has requested the ASEAN to encourage the United States and European Union to end economic sanctions against Myanmar as the situation in the country has totally changed and has made progress on reforms.

The Thai foreign minister said that the ASEAN foreign ministers proposed that Myanmar invite them to visit Naypyidaw, the capital, and he has taken this to discuss with his government. The Myanmar minister believed that the visit was most likely to take place after the by-election in April.

via ASEAN urges US, EU to end Myanmar sanctions.