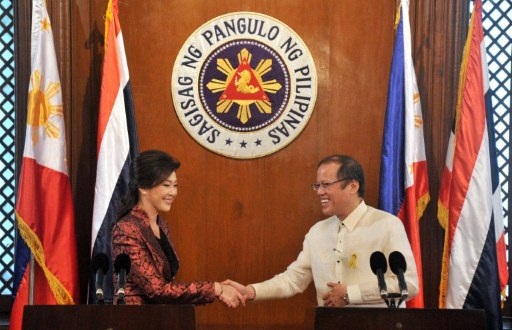 Ms Yingluck and her entourage arrived at the Philippine capital Thursday morning and were welcomed by President Aquino at his official residence. The two leaders then had a discussion, followed by a one-hour plenary meeting.

At a joint news conference, the Thai premier thanked the Philippines for their warm welcome and for their assistance when Thailand faced the flood crisis, while expressing condolences regarding the recent flood in the Phillippines.

Double taxation, is the main obstacle to Thai investors.

Ms Yingluck said she believed her travel to the country will strengthen the ties of both nations, as the Philippines and Thailand were co-founders of the Association of South East Asian Nations (ASEAN) and have similar types of democracy and governance.

The success of the discussion will be based on the mutual benefits of the peoples of both countries and the region, she noted.

The Thai premier also asked for the Philippine president’s support to resolve double taxation, which is the main obstacle to Thai investors.

In addition, she also asked Manila to help the Thai private sector to invest more easily in the Philippines, while urging it to prepare the two countries’ fifth bilateral joint commission meeting to cooperate on matters of economy, education, drug problems and transnational criminals.

Concerning food security, the Philippines and Thailand are ready to join hands on the issue, particularly on rice, which Thailand stood ready to export more rice to the Philippines, according to Ms Yingluck.

Thailand is to support peace and security in South China Sea.

Both countries are determined to successfully create the ASEAN Community in 2015 in order to link with its member states and other countries, she said.

Meanwhile, Mr Aquino praised democracy in Thailand and said the Philippines is ready to cooperate with Thailand at both bilateral and multilateral levels such as in terms of stronger trade and investment as well as studies and joint natural disaster prevention between both nations.

As the Philippines is interested in importing Thai fruit, the president noted that obstacles to trade will be reduced and said he will assign his agriculture minister to visit Thailand to discuss reducing mutual trade barriers, particularly for agricuttural produce.

Mr Aquino hosted a luncheon at his residence for the Thai premier and her delegation, after which the group left for Thailand in the afternoon. (MCOT online news)

The Philippines has shown interest towards importing more agricultural products from Thailand after a bilateral meeting between the leaders of both countries.

During a joint press conference held after a meeting with President Benigno S. Aquino III of the Philippines, Prime Minister Yingluck Shinawatra expressed confidence that her official visit to the Philippines will contribute to strengthened ties between the two nations. She also requested the Philippines to facilitate investment procedures for the Thai private sector and to solve the issue of double taxation, which has been a major obstacle for Thai business operators wishing to invest in the island country.

Additionally, the two parties agreed on the topic of food security while the Philippines expressed interest in increasing its import of agricultural products from Thailand, especially rice and fruits. Thus, Ms. Yingluck has invited the Filipino Agriculture Minister to visit Thailand for further discussions on import possibilities and measures to reduce trade barriers.

As co-founders of the Association of Southeast Asian Nations or ASEAN, both countries are looking forward to the establishment of the ASEAN Community in 2015 as it will bring the ASEAN region closer to the global community.

Thailand faces crises and opportunities with AEC Coming in 2015

Thailand is currently expecting vaccines to be delivered in mid-2021. The doses would cover 13 million people in a population of about 69 million. Thailand’s National Vaccine Institute signed a non-refundable advance market commitment contract worth 2.38 billion baht (US$79 million) with AstraZeneca to reserve the supplies