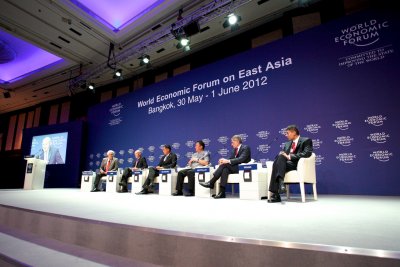 Despite painful lessons from Europe, integration should generate more opportunities than risks to East Asian countries if they are pursuing growth to spur domestic economies, agreed panellists at World Economic Forum on East Asia 2012.

During the opening plenary on May 31 on “East Asian Models for Transforming the Global Economy”, Gerard Mestrallet, chairman and executive officer of GDF Suez and co-chair of the forum, noted that even in Europe, the integration has helped sustain peace in the region for 50 years. Even when fiscal rules disrupt the process, he foresees deeper integration rather than disintegration.

Eswar Prasad, professor at Cornell University, noted that for a single currency, a better institution is necessary to ensure smooth integration. For Asean, integration is still an answer.

“The integration will not only draw capital but also strengthen domestic resilience,” he said, adding that these countries may not strengthen integration for capital, but they still need to deal with what comes with the capital.

Indonesia’s Trade Ministr Gita Wirjawan wished Europe show decisiveness like what Asian countries demonstrated during the 1998-1999 following the financial crisis. He also raised doubt whether the situation would be the same if the International Monetary Fund (IMF) is led by an Asian chief.

“We need a stronger Europe. We fear its weaknesses less than we fear its strengths,” he said.

Thailand’s Deputy Prime Minister and Finance Minister Kittiratt Na-Ranong added that integration will strengthen Asean as a whole, “but we’d not go as far as a single currency”.

While lauding the strengths of Asean nations, the panellists expressed grave concerns over the widespread corruption in the region.

via Integration still a must for Asean – The Nation.