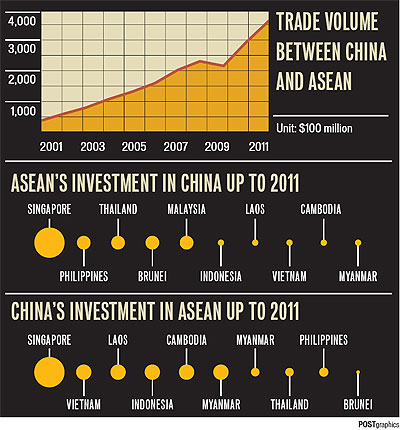 Thailand and Southeast Asian countries continue to be a magnet for investment by Chinese companies thanks to the growth prospects of the region and the imminent formation of the Asean Economic Community (AEC).

As the ‘factory of the world’ faces rising labour and production costs, Chinese companies are taking a closer look at Asean and Thailand.

Vietnam overtook China to become the largest producer of Nike shoes in 2010.

“Chinese investors have shown a growing tendency to establish production bases in Asean and Thailand is among the first countries to which they pay attention,”

said Bang-on Thitapaisalpol, the director of the Guangzhou office of the Board of Investment (BoI).

She said there were many reasons for the trend but one of the biggest advantages Thailand has is its location in the centre of Asean, where new rail and road links would help make Thailand the logistics centre of the region.

Asean, which currently has about 600 million people and trade valued in excess of $2 trillion, has seen its role gradually rise among Chinese investors, who have either used the region as the source for materials for their manufacturing sector or as export markets for processed goods.

This has prompted a surge in two-way trade between China and Asean which hit a new high last year, reflecting the gains made under free trade agreement that took effect in 2010 between Asean and the world’s second largest economy.

Last year China-Asean trade value totaled $362.3 billion, a surge of 24% from 2010. In the first seven months of the year, the figure was up 9% year-on-year to $220.57 billion. China’s top three Asean trade partners are Malaysia, Thailand and Singapore.

Under the FTA, the average tariff on goods from Asean countries to China has been reduced to 0.1% from 9.8%.

Apart from this, there has been a gradual shift of production bases from China to Asean nations over the past few months in response to rising wages at home. As a result, some Asean members have started to take China’s place as the “world’s factory”. Vietnam is a good example, usurping China to become the largest producer of Nike shoes in 2010.