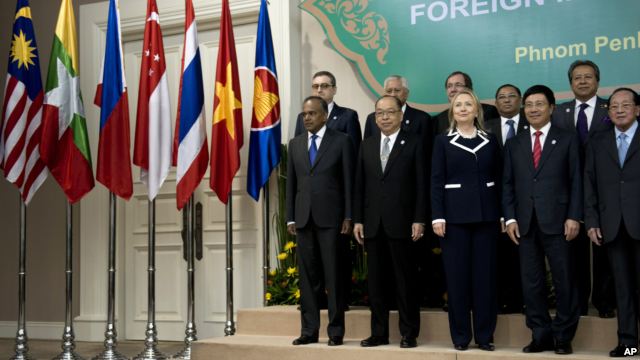 World leaders congregate this week in Cambodia for high-level meetings of the Association of SouthEast Asian Nations.

Analysts say ASEAN members will try to present a more united front after divisive meetings in July ended in embarrassment. But hot-button issues, including a key maritime dispute and human rights concerns, will continue to test ASEAN’s resolve.

July’s ministerial summit in Phnom Penh could hardly have gone worse for officials hoping for a show of unity among the diverse 10-member bloc. The meetings stumbled over the contentious issue of competing claims to the South China Sea. Cambodia, this year’s chair, was accused of siding with its powerful benefactor, China.

This leaders’ summit, then, may be an opportunity for Cambodia to find some redemption in the eyes of its critics, before it gives up the chair for the year.

Carlyle Thayer, an analyst on ASEAN affairs with the University of New South Wales, says ASEAN members will aim to avoid a repeat of July’s stalemate.

“So the worst thing Cambodia can do is try to exert a strong influence against where the currents are going,” Thayer says. “This is their last moment of glory-to go out being looked at well. The point is there’s nothing further they can really do for China.”

via ASEAN Hopes to Improve Unity During Summit.