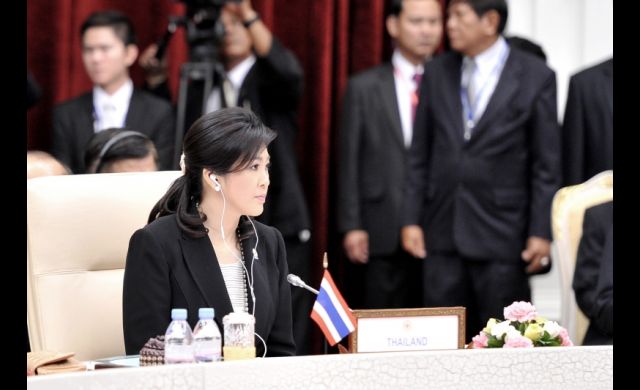 Thai Prime Minister Yingluck Shinawatra today called on Japan to play a key role in connecting the Southeast Asian region, particularly in the development of the Dawei deep seaport mega project near the Thai-Myanmar border and cooperation in preparing the region for possible disasters.

The Thai premier openly sought the Japanese support in handling natural disasters and exchanges of information with the Asian Disaster Preparedness Centre in order to connect a disaster arning system through satellite.

Ms Yingluck made the overture in a meeting among member countries of the Association of Southeast Asian Nations ASEAN and Japan, held on the sidelines of the 21st ASEAN Summit in the Cambodian capital. The ASEAN-Japan Summit, the 15th of its kind, lasted about one and a half hours.

Next year marks the 40th anniversary of ASEAN-Japan relationship

She called on Japan to take a larger role in connecting the region, especially especially regarding logistics to link Thailand’s border areas with neighbouring countries, and the Dawei project with Laem Chabang deep seaport on eastern Thailand.

Japan should increase its activity in the Mekong region through the Initiative for ASEAN Integration and the Mekong Japan Forum with emphasis on agriculture, public health and human resources development, said Ms Yingluck.

Next year marks the 40th anniversary of ASEAN-Japan relationship. The Thai prime minister said she believes the ASEAN and Japan relationship will be strengthened in every aspect while trade and investment will also be enhanced. MCOT online news