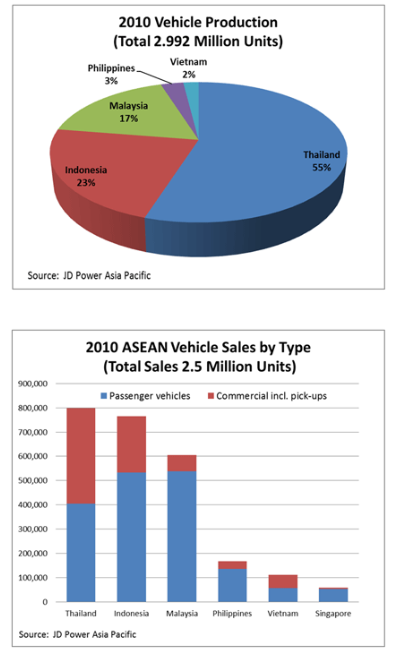 A rising middle class and growing economies have driven tremendous growth in the Asian auto industry in the last 10 years. Vehicle sales in the Asia Pacific region reached 30 million units in 2011, with sales figures growing nearly 13% annually between 2000-2011.

These figures are even more impressive when compared to negative growth in North America and just 1% growth per year in Europe. The rising trend of auto sales in Asia will continue for at least the next 8-10 years on the back of this expanding middle class. Potential car buyers in most countries in Asia- here defined as the number of households with annual disposable income (ADI) over 10,000 USD – are forecasted to grow at a more than 5% annual rate during 2012-2020.

In Asia, countries that will enjoy double-digit compound annual growth rate (CAGR) in the number of potential car buyers are China, India, Indonesia, and Vietnam. By way of contrast, annual growth rates for developed countries are projected to grow slightly less than 2% during the same period. In addition, current low levels of car ownership per capita indicate a high potential for growth in demand for vehicles in China, India, Indonesia, and the CLMV countries (Cambodia, Laos, Myanmar, Vietnam).

Despite historically high growth in auto sales in Asia, there is still room for further expansion

China, with the world’s highest number of vehicle sales (18.5 million units in 2011) has a passenger car to population ratio of just 56, even lower than that of Thailand (at 63) with an economic growth rate half of China’s.  Comparing those ratios to the more than 250 ratio in the developed countries in Asia, e.g. Taiwan, South Korea, Japan, Brunei, and Malaysia, means that car sales in the Asian developing countries have substantial room for further growth. In 2011, the ratio of passenger cars to thousand population in Indonesia, India, Philippines, and CLMV countries (on average) was only 40, 16, 9, and 13, respectively.

There is broad passenger car segmentation among Asia countries, and the trend is changing due to different factors. Environmentally-friendly consumers are driving hybrid and electric auto sales in Japan. During May 2012, 19.7 per cent of the new cars sold in Japan were hybrid cars – representing an 11 percentage point leap compared to the previous year. An increase in image-conscious buyers has led to a hike in vehicle imports in South Korea on the back of reduced prices thanks to a free trade agreement with the US and the EU. Whereas sales of domestic cars show signs of decline for the first time in four years since 2008, the share of new imported vehicles rose to 9.5% in 2012 compared with less than 3% before 2004.

Malaysia is welcoming more global brands after uncompetitive local brands have long owned a large market share of vehicle sales. Indonesia prefers multi-purpose vehicles (MPV), that enjoy as much as a 70% market share.  In Thailand, the government tax scheme for first-time car buyers generated substantial growth in small- and eco- car sales last year. While a bright outlook for demand is clear, the players on the production side are also changing.

There are three trends in Asia to point out here: First, the major players, i.e. Japanese auto makers, have a clear direction to focus on next-generation vehicles, including hybrids, plug-in hybrids, electric vehicles, and fuel-cell powered vehicles, along with changes in domestic demand. While production of passenger cars in Japan has gradually declined by 1% annually since 2005, that of next-generation vehicles – i.e. hybrid, plug-in hybrid, electric, and fuel-cell powered vehicles – is set to move from a  20% market share today to around 40% by 2030. Read More

Impact of Liberalization for the ASEAN Economic Community