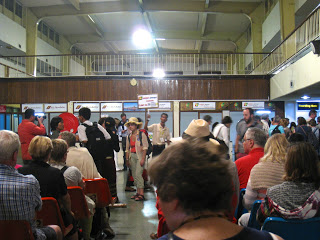 The Master Plan for ASEAN Connectivity and its proposals for improving linkages within the ASEAN Economic Community have been a hot topic. However, the real impact of improved ASEAN connectivity is often lost among the statistics and funding figures thrown around.

This week, I had the unique opportunity to experience the issues related to ASEAN connectivity during travels from the south to the north of ASEAN. This crystalized ASEAN’s connectivity issues for me.

Here’s a summary of what I went through this past week:

After arriving in Yangoon, we promptly got stuck in extremely long immigration lines

Monday – Starting in Singapore, I took an Air Asia flight to Jakarta’s new but already quite full Terminal 3. After getting into a taxi which got lost, I finally made it to a meeting with my client, the Indonesian Ministry of Trade. After the meeting, I was caught in a rainstorm.

Fortunately, a young boy with an umbrella walked me to the street and helped me get a taxi; I tipped him US$ 1 for his assistance. My taxi to the airport then got caught in a flash flood and we had to circle around Jakarta to finally get to Terminal 3. I got on another Air Asia flight to the Low Cost Carrier Terminal in KL, then took a bus to KL Sentral.

Tuesday – I took a taxi in heavy traffic to meet a client in downtown KL. After the meeting, I took a return taxi and rode the KLIA Ekspres train to KLIA. Then I took a Jetstar flight back to Singapore.

Wednesday – To get to an Amcham Singapore meeting on Myanmar, I called two Singapore taxi companies simultaneously for 40 minutes but failed to reach an operator. That meant a 15 minute walk to the main road, where I finally caught a taxi. The taxi driver claimed that the drivers are too busy picking up passengers on the road to take phone or internet bookings, despite the higher fees involved. The driver also claimed that it was my fault for living in a “bad neighborhood” for taxis.

Thursday – With my sister, I flew on Singapore Airlines to Yangon (my wife’s cousin Wilson was the pilot). After arriving, we promptly got stuck in extremely long immigration lines at the gleaming new international terminal, and then traffic jams in downtown Yangon, both due to Myanmar’s new popularity.

Friday – We left at 5 am to catch a 6:20 Air Mandalay flight to Mandalay. After boarding, the turboprop plane reached the runway, stopped for a moment and quickly returned to the decrepit domestic terminal. We then sat there for 5 hours with no information; I had to call the travel agent to talk with the airline. Finally, Air Mandalay used an incoming plane for our flight and delayed the later flights by an additional 4 hours.

Note: This article was published on behalf of  AEC Blog, the views and opinions expressed in this article are those of the authors and do not necessarily state or reflect the views of  Thailand Business News