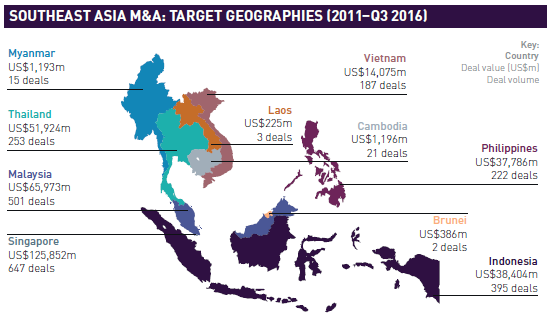 In Southeast Asia M&A market, 2016 looks on track for a comparable finish in value, with Q1–Q3 2016 already seeing US$43.8bn from 281 deals, where Thailand overtook Singapore to become the top target jurisdiction for intraregional deals in Southeast Asia, recording US$9.9bn worth of deals from Q1–Q3 2016.

With falling demand, Southeast Asian companies which previously leveraged up to cater to China’s heyday of double digit growth now found themselves in overcapacity, with some on the brink of default and distress.

In a year marked by volatility and uncertainty across the globe, Southeast Asia has been dealt a mixed hand of challenges and opportunities, both testing the region’s ability to overcome increasingly difficult economic conditions and offering new pathways towards growth. In terms of mergers and acquisitions (M&A), the region posted 388 deals worth US$47.6bn in 2015. 2016 looks on track for a comparable finish in value, with Q1–Q3 2016 already seeing US$43.8bn from 281 deals.

“In recent years, the uptake of advanced technologies, such as the use of virtual data rooms (VDRs), has been changing the face of the M&A deal process in advanced economies, and Southeast Asia is following suit.” said Head of Sales, Merrill DataSite Asia Pacific, Renee Paik.

“There is an exponential growth in the number of clients seeking our VDR platform to manage the handling and sharing of their confidential documentation, especially driven by compliance requirements and market standards for not only global but also domestic and regional transactions such as fundraising, M&A and IPOs.

By facilitating the organization and ease of access to data, virtual data rooms expedite the due diligence and deal-making processes while reducing costs and resources at the same time.”

Adding commentary to analysis via an in-depth interview, Srividya Gopalakrishnan, Managing Director at Duff & Phelps, presents a market update on investment trends in Southeast Asia, while sharing insights on the ways of mitigating risks and maximizing investment potential in the region.

“Conducting due diligence in a thorough manner also helps with the identification of gaps and risks from both the legal and commercial fronts, giving investors the chance to seek legal advice and take precautions that can protect them from misrepresentation or the lack of knowledge,” according to Gopalakrishnan.

Technology is playing an increasingly integral role in expediting and improving both due diligence and the overall deal-making process. For example, Gopalakrishnan says, “the use of virtual data rooms has not only boosted the efficiency of the process, but also enabled the ease of use of data, with business and financial records being organized in digital indexed form.”

Gopalakrishnan asserts, “It is imperative for investors to be aware of business continuity risks.

This includes a wide spectrum of issues, from procedural matters such as the issuance of work visas, to talent sourcing for skilled employees, and on to operational risks such as the shortage of power and labor strikes.”

“With the global increase in cyber and data security threats,” Gopalakrishnan emphasizes, “data security and protection has become a prime area of focus for risk prevention in businesses, and investors need to factor this into business continuity planning when evaluating a potential investment target.”

The full newsletter is available for viewing here:

Thailand is currently expecting vaccines to be delivered in mid-2021. The doses would cover 13 million people in a population of about 69 million. Thailand’s National Vaccine Institute signed a non-refundable advance market commitment contract worth 2.38 billion baht (US$79 million) with AstraZeneca to reserve the supplies