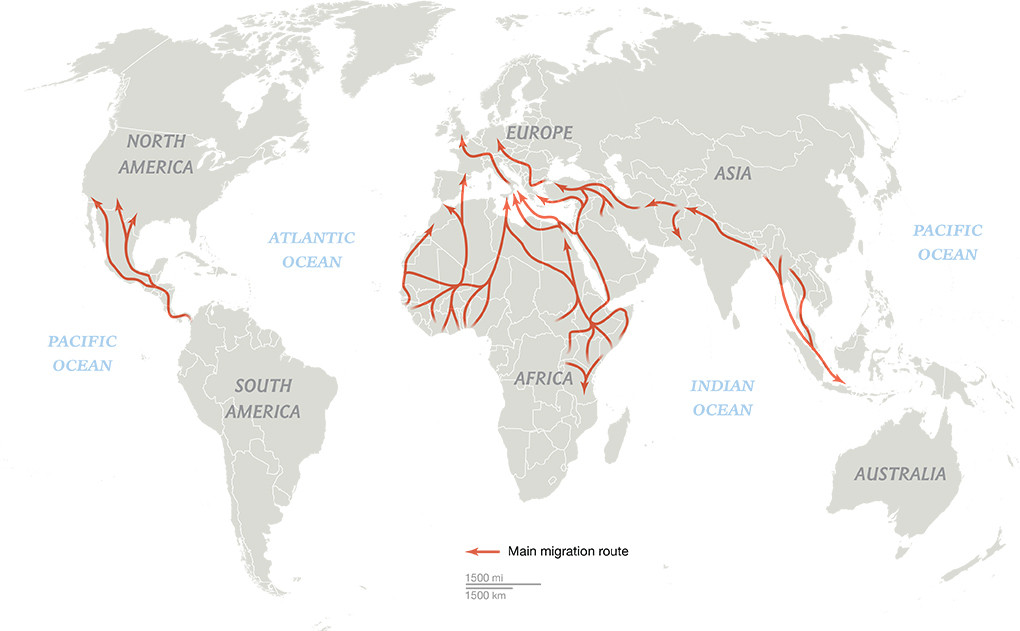 To describe the rapid rise of East Asia’s influence would, at this point, be a cliché. But the speed of this well-documented rise has not just created opportunities; it has created risks.

And there are a number of ways in which growth in the region has outpaced resilience against these risks.

I want to look at three primary areas, also discussed in this year’s Global Risks Report from the World Economic Forum: the rise of technology, mass migration and economic interdependence, with a focus on China’s outsized influence on markets in the region and globally.

Technology has both fuelled and shaped Asia’s rise, particularly in recent decades. In China, where many Western tech companies have failed to take hold – for both market and regulatory reasons – local businesses have arisen and, in some cases, leaped ahead of their Western counterparts – from Alibaba and Didi Kuaidi to Tencent and Baidu.

WeChat in China is a great example. Where Facebook, Twitter and Instagram have become the new nexus of product marketing, WeChat was able to take this a step further, becoming a full e-commerce platform (among other things).

Facebook is just recently exploring a viable option for this by allowing companies to give e-commerce guidance and customer support in its Messenger platform.

According to the Global Risks Report, cyberattacks were seen to be the top threat in Japan and Malaysia, while cybersecurity was the third most cited risk to doing business in the region overall.

The recent high-profile hack of the Bangladeshi central bank has also been linked to bank hacks across South-East Asia.

In a region with an increasingly tech-savvy and tech-reliant population, risks and opportunities come in equal measure.

Coupled with rapid urbanization, mass migration has influenced the spread of ideas and innovation across the region, but also has potential negative consequences, from shadow economies to climate change.

The report cites the example of Rohingya refugees seeking asylum in Malaysia: they are an ethnic and religious minority from Myanmar that have fled to neighbouring countries, with a particularly large proportion landing in Malaysia.

The Rohingya have, in large part, shown creativity and ingenuity, establishing businesses that fill holes in the market.

However, tracking large and rapid flows of refugees or migrants into countries is difficult, let alone successfully registering them, the responsibility for which rests with the United National High Commissioner for Refugees.

This results in many Rohingya being paid off the books or setting up businesses that fall outside of regulations, resulting in a precarious existence.

Disenfranchized minority groups like the Rohingya can create rifts within countries, both with shadow economies and in social uncertainty and, occasionally, violence.


Over the years it has been argued that growing economic and political interdependence would lead to further integration. In large part, it has. Greater market orientation and more open political attitudes are a significant contributor to East Asia’s successes (particularly those of China).

But this rapid expansion of trade and political ties has also left some holes in how to protect against market volatility across borders. Economic risks loom heavy on the horizon, with Australia, Cambodia, China, Hong Kong, Myanmar and Thailand citing an asset bubble as the top risk.

It may come as no surprise that many of these countries have some of the most significant trade relations with China, leaving them exposed to the larger country’s own potential economic woes.

China’s faltering growth – with state investments into corporations continuing despite already massive liabilities to equity ratio and the central bank struggling to meet commitments to a more marketing-oriented exchange rate – has already had a significant impact across global markets.

In closer proximity to China, the pain of a fall after an asset bubble of that size pops may be exceptionally hard to bear.

Over the past few decades, the focus has generally stayed on opportunities for rapid and substantial growth in the region. To maintain this growth, companies need to keep building a deeper understanding of the varied risks as well as the opportunities in East Asia.

Have you read?
What is ASEAN? An explainer
What do the next 25 years hold for East Asia?
Read more from our ASEAN blog series

The World Economic Forum on ASEAN is taking place in Kuala Lumpur, Malaysia, from 1 to 2 June.

ASEAN is 50 and here’s why you should care