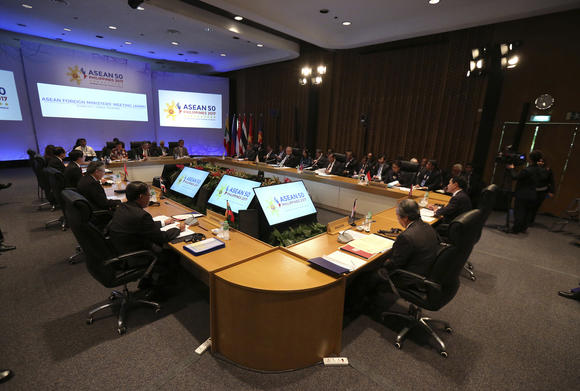 After five decades of existence, the Association of Southeast Asian Nations continues to do what it has always done best — soul searching.

But as the 10 leaders of ASEAN countries prepare for their 30th summit in Manila on April 29, the familiar regional and international environment in which they have operated is undergoing radical change.

The grouping faces disruptive new challenges at a time when its members are themselves growing stronger economically and becoming more self-confident and assertive in their international dealings.

Such assertiveness can cause division among the member countries, as witnessed by the group’s response to the territorial and maritime conflict in the South China Sea over the past decade.

The lack of a common ASEAN position over the July 12, 2016 ruling by the Permanent Court of Arbitration in The Hague against China’s claims in the region has been portrayed as a sign of ASEAN fragility.

The Philippines, despite the favorable ruling, decided not to continue to press China. President Rodrigo Duterte instead adopted a softer tone toward Beijing than his predecessors, a move that reduced overall tensions.

As the current ASEAN chair, Manila’s position will almost certainly be reflected in the association’s final statement.

Signs of growing political assertiveness among some ASEAN members, both within the group and in the wider international arena, have given the impression they are going their different ways. Their position on China is one example.

While ties at the ASEAN-China level are cordial, individual members have different levels of intimacy and interaction with Beijing. Relations between Singapore and China, for instance, have become strained, although this has yet to affect…