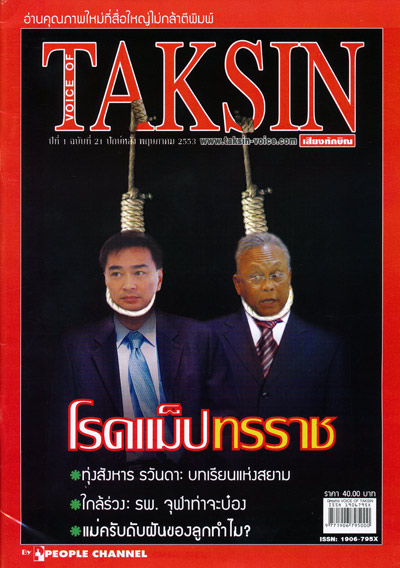 Thailand’s DSI director-general Tharit Pengdit made the remarks as the department investigators and prosecutor interrogated Mr Somyos today; the department will seek the court’s permission to detain him on Monday.

Karom Pontaklang, lawyer of the ‘Red Shirt’ United Front for Democracy against Dictatorship (UDD), said on Sunday that his client Mr Somyos denied all the accusations made during the investigation and that he will seek bail with Bt1 million in collateral.

Red Power, April, 2010 The cover reads: The Russian Revolution - The anti-royalists in the early of the 20th century - History will not forgive us if we do not seize the power at this moment

Whether or not Mr Somyos will be granted bail depends on the court’s consideration, but DSI will oppose his bail attempt as he has been summoned three times, but failed to turn up to report himself until he was arrested while attempting to cross the border to Cambodia, according to Mr Tharit.

The DSI chief however said Mr Somyos has been transferred to a safehouse after Red Shirt supporters gathered at the DSI headquarters last night to pressure officials.

Mr Tharit said Mr Somyos will be sent to Bangkok Remand Prison once the court approves the detention.

The Red Shirt activist was detained at Aranyaprathet border crossing in Sa Kaeo province on Saturday afternoon when he was about to leave the country at the immigration checkpoint but his name was on the immigration blacklist.

Reporters Without Borders is concerned about the fate of Somyot Pruksakasemsuk, editor of the magazine Voice of Thaksin, who was arrested by the Department of Special Investigation (DSI) on 30 April and was placed in pre-trial custody today by a Bangkok criminal court on a charge of lèse-majesté. A request for release on bail was rejected.

“This arrest confirms that a crackdown on the opposition media is under way,” Reporters Without Borders said. “Once again it is a lèse-majesté charge that has been used to detain an opposition journalist and activist. This is not an isolated case but one that targets all media that are close to or support the opposition. In less than a month, about 20 opposition figures have been accused of lèse-majesté.”

The editor of the bi-monthly Voice of Thaksin (which was banned in 2010 and which was subsequently replaced by Red Power), Somyos was arrested in May 2010 following the final assault on the “Red Shirt” opposition demonstrators and was held for three weeks

Somyos was arrested at the border in Aranyaprathet, in the eastern province of Sa Kaeo, as he was trying to cross into Cambodia. The Bangkok Post quoted a police officer as saying the court granted a request from the DSI to hold him for ten days so that he could not “tamper with the evidence against him.”

The editor of the bi-monthly Voice of Thaksin (which was banned in 2010 and which was subsequently replaced by Red Power), Somyos was arrested in May 2010 following the final assault on the “Red Shirt” opposition demonstrators and was held for three weeks. He later gave Reporters Without Borders an interview.