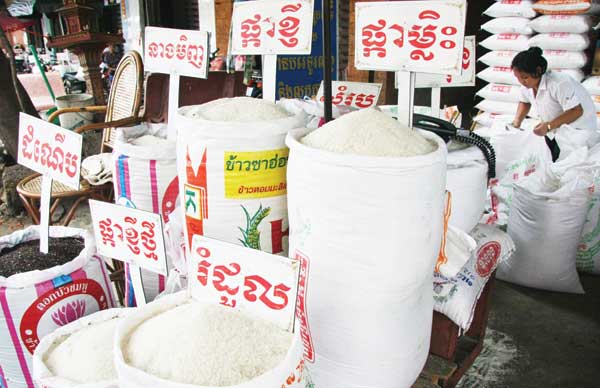 Low international rice prices have further stymied Cambodia’s milled-rice exports, millers reported yesterday, but large orders – reportedly the first ever – from the Philippines have encouraged at least one of the Kingdom’s biggest rice exporters. Mega Green Imex Cambodia this year to date has received orders for 50,000 tonnes of milled rice from the Philippines, Managing Director Outh Renne said yesterday.

That’s 13,000 tonnes more than Mega Green’s total orders from the European Union last year, he said.The orders, the first ever from the Philippines and during a time when Cambodian rice prices are higher than other regional exporters, represented a shift in Cambodian rice trade from Western markets to buyers in its own backyard, Outh Renne said.“Cambodia should understand that the biggest market for rice is in the Philippines and Indonesia,” he said, adding that the government-brokered deal was an attempt on the part of the Philippines’ National Food Authority to diversify its imports.

Cambodia exported about 173,000 tonnes of milled-rice last year, a 226 per cent increase on the year before, according to Ministry of Commerce figures. The majority of the shipments went to the European Union.The Philippines and Indonesia are expected to import an annual 4 million tonnes of rice a piece, Outh Renne said, markets well suited for the 1 million-tonne export goal Prime Minister Hun Sen set for milled rice in 2010.

Excerpt from:
Cambodia may find new rice market in Manila