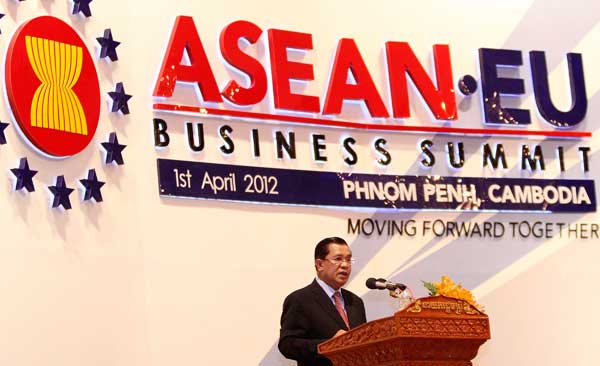 Business leaders from the European Union and ASEAN member states yesterday discussed the future of mutual trade and investment as crisis continues to threaten Europe and economic integration challenges the 10 Southeast Asian states.

“The most important thing is to make sure the EU will remain one of ASEAN’s major markets and investors,” EU ambassador to Cambodia Jean-François Cautain told the Post at the ASEAN-EU Business Summit in Phnom Penh yesterday.

The European Union was the biggest investor in ASEAN and its second-biggest trading partner in 2010, with US$10.2 trillion in bilateral trade, or about 10 per cent of all ASEAN trade. Bilateral investment was about $347 billion in 2010.Tone for tradeEurope’s economic downturn poses a threat to the two regions’ business relationship, and ASEAN’s attempt to bring law, tax and trade regulations into harmony by 2015 would ease transactions on a number of levels should crisis restrict trade, Cautain said.Business accommodations presented to ASEAN ministers today by visiting European companies would set the tone for trade between the two geopolitical and economic organisations this year, he said