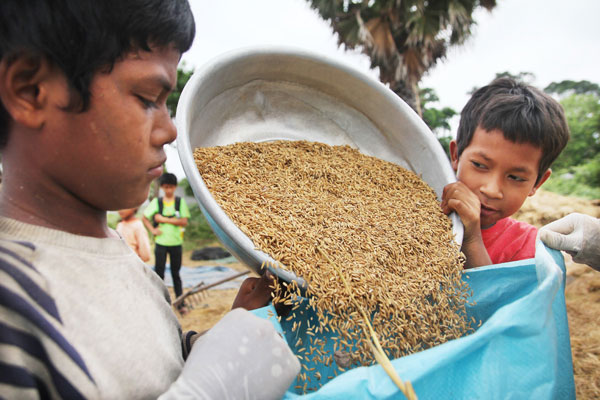 Despite a slow start for milled-rice exports in 2012 brought on by falling regional prices, officials yesterday predicted Cambodian shipments would more than double to 400,000 tonnes this year.

Tax exemptions from Europe, which boosted milled-rice exports to about 173,000 tonnes last year, would continue to help the sector, Minister of Agriculture, Forestry and Fisheries Chan Sarun said yesterday at a ministry meeting.He acknowledged, however, that low rice prices in the region had led to a relatively slow start during the first quarter of the year and did not offer export figures for the three-month period.New orders for milled rice in January and February were considerably lower than the same months in 2011, the Post reported.

The high cost of milling and transportation in Cambodia had rendered the industry uncompetitive in the face of falling prices in Vietnam, India and Thailand, experts had said.Trade with China could help realise the goal, although Europe would remain the Kingdom’s biggest market, Kim Savuth, general director for Khmer Food Company, said yesterday.

Kim Savuth claimed Cambodia exported about 37,000 tonnes of milled rice in the first three months of the year, up from what the Ministry of Commerce said was 25,784 tonnes during the same period in 2011.Price competition remains a problem for Cambodia, Mey Kalyan, senior adviser to the Supreme National Economic Council, said yesterday. But foreign investors, especially China, are increasingly interested, he said.Cambodia’s first rice exports to China failed to pass Chinese inspections earlier this year, the Post reported