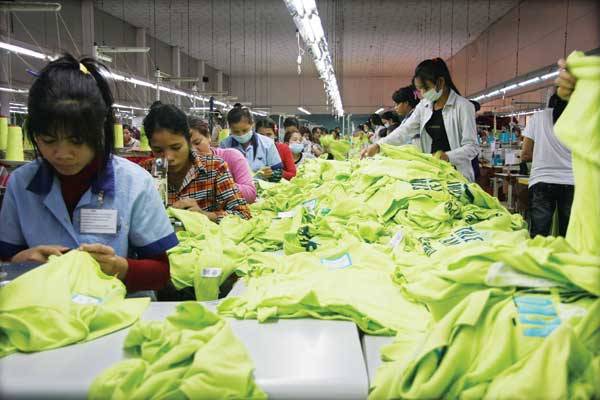 Cambodia’s total trade climbed 19 per cent year-on-year in the first quarter, according to the Ministry of Commerce, with a deficit driven by the Kingdom’s reliance on key imports. Photo by Pha Lina Employees work at a garment factory in Phnom Penh. Total trade for the first three months of 2012 reached US$3.2 billion, up from $2.7 billion a year ago.Imports, however, comprised $1.8 billion, or 56 per cent, of the total, as Cambodian markets continued to demand fuel, raw materials for the all-important garments sector and construction materials.

Exports of finished garments, rubber and rice, among other products, accounted for the remaining $1.4 billion of trade, according to the ministry’s figures.Although the Kingdom’s business-friendly investment climate and growing economy accounted for the increase, Supreme National Economic Council adviser Mey Kalyan noted the potential problems inherent in the trade imbalance.“It is still a concern, so we have to be a bit careful,” he said of the larger import total. “If it continues, it won’t be a good thing for us.”Mey Kalyan pointed to the economic troubles in the United States and the European Union as one reason for the imbalance, in addition to Cambodia’s need to import materials crucial to its development.