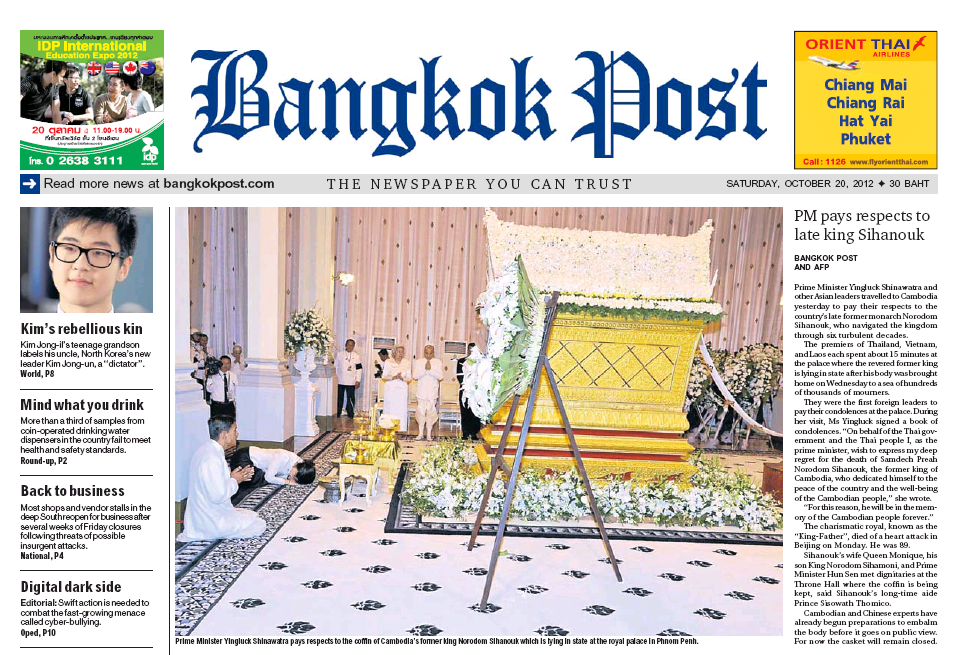 It was 1940 and the City of Lights had gone dark. Men of importance of Vichy France were meeting in order to decide how to manage their overseas colonies and protectorates in light of the new global reality — Hitler strolling along the Champs-Élysées as the Nazis occupied Paris.

In Indochina, specifically Cambodia, many members of the monarchy had already elucidated the nous n’aimons pas les Français refrain a little too much for Vichy’s liking. But there was a teenage boy, however, several pegs down the totem poll of Cambodia’s royal succession whom the French thought might well tow the Vichy line. His name was Norodom Sihanouk, and the French, thinking he could easily be malleable into their puppet, would not be the last ones to deprecate him. The former King Sihanouk died on Sunday in Beijing. He was 89-years old.

Flags were ordered flown at half-staff throughout the country as a period of mourning was set to commence in a country where any special day of the monarch or its family is reason enough to declare a public (and unpaid for workers) holiday.

Sihanouk’s legacy is rather mixed. He succeeded in kicking the French out just a decade into his rule. And, as one of the founding members of the non-aligned movement, tried to keep Cambodia neutral during the Cold War. He abdicated the thrown in 1955 in order to become Prime Minister, and his foreign policy thenceforth was a disaster due to a litany of factors.

It was a constant balancing act between placating a multitude of actors: the U.S. and his communist neighbors, most notably China and Vietnam. U.S. bombing raids during the Vietnam War would routinely target communist fighters who had traversed the border. This resulted in a massive American bombardment of Cambodia. In 1970, an American-backed coup forced Sihanouk to flee to China. However, with even higher suspicions of the Vietnamese communists, Sihanouk soon found himself allying with Pol Pot’s Khmer Rouge. Some historians have mistakenly taken this as Sihanouk’s support for the Khmer Rouge, but his “alliance” with them was mainly out of self-interests and necessity. When the Khmer Rouge drove out the Vietnamese in 1975, Sihanouk, who had since re-adopted the title of King, returned home but was virtually a prisoner in his own palace.