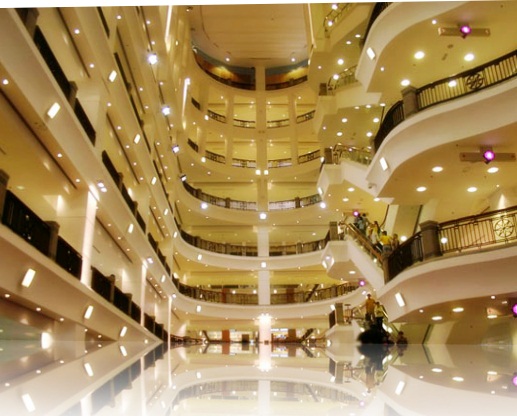 Indeed, the October edition of the Malaysia Retail Industry Report, published by Business Monitor International, found the sector’s sales grew by 9.1% in the second quarter of 2011, which was unexpectedly higher than the 5.8% growth recorded during the same period in 2010.

Berjaya Times-Square Kuala-Lumpur Shopping Mall. In the long term, continued growth in the retail sector seems to be highly likely due to certain demographic fundamentals.

The sector’s growth rate for the first six months of 2011 was 8.2%, and sales are expected to have risen by more than 10% for the third quarter of 2011. Moreover, retailers are optimistic about continued growth for the rest of the year, encouraged by the middle class’s growing disposable incomes and low unemployment rates.

“This latest quarterly result was 28% lower than the earlier estimate by retailers (at 12.6%) during the middle of this year. However, it was higher than the forecast made by Retail Group Malaysia at 7%,”

Tan Hai Hsin, the managing director of Retail Group Malaysia, which compiles statistics on the sector, said in the report.

Tan reasoned that the higher growth seen during the second quarter was partly due to the lower base during the same period in 2010, which had the lowest quarterly growth for that year.

In the long term, continued growth in the retail sector seems to be highly likely due to certain demographic fundamentals.

The country also has a growing urban contingent that is willing to spend its disposable income, with the average urban household spending almost twice that of a rural household between 2004 and 2005, according to the Department of Statistics Malaysia.

With the country’s population expected to increase to 30m by 2015, GDP per capita is predicted to rise almost 45%, from $9686 in 2011 to $14,019 in 2015. Additionally, with the UN projecting that the urban population will account for almost 76% of Malaysia’s total population by 2015, the obvious conclusion is that the country’s retail outlets and mega-malls are likely to continue to increase their sales.

This is especially good news for retailers, as the government’s recent announcement that it would abolish import duties on about 300 luxury items, to go into effect from January, is expected to spur a sizeable influx of luxury brands to the country.

Like much of Asia, Malaysia is in love with mega-malls

Like much of Asia, Malaysia is in love with mega-malls, and many urban consumers choose to spend their money at the high-end Pavilion or Suria KLCC rather than local family-run shops, as would have been the case not so long ago.

Add to this the fact that large foreign hypermarkets such as Tesco and Carrefour are now dominating the retail landscape and it is easy to see why many local players – who may lack the requisite expertise and financial resources – are finding it difficult to compete.

These large foreign retailers have been expanding aggressively in Malaysia, ousting many local players from their former leading positions on the retail ladder and further fracturing an already fragmented market.

While Malaysia’s Giant remains the country’s retail leader with 5.6% of the market share, Tesco is now number two with 3.8%. AEON Group is in third place with 2.6% and Carrefour holds fourth place with 1.7%. Only three other local players – Store Corp, Econsave Cash & Carry and Senheng Electric – are in the top 10 in terms of market share by retail value, according to industry sources and government statistics.

As grocery retailers – particularly the hypermarkets – begin to stock non-grocery products like clothes, furniture and home appliances, they are also encroaching on the traditional domain of non-grocery retailers. According to the retail industry report, however, neither group seems to be feeling the pinch so far.

For now, middle-class urban customers are keeping their wallets open, but as uncertainty hangs over many Western economies and the costs of goods rise because of higher transportation and manufacturing costs – caused in part by the on-going conflicts in oil-producing nations – retailers will be forced to either absorb the increasing cost of goods themselves or pass the increased costs onto customers. Either way, intensified competition is expected to continue for the foreseeable future.

2011 Year of highest ever catastrophe-related losses