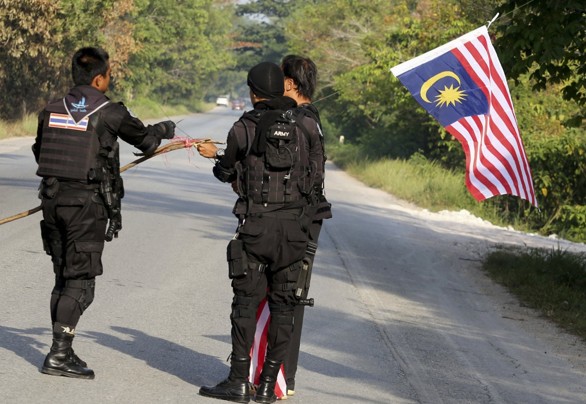 Thailand and Malaysia have reaffirmed their close relations and cooperation, despite attempts to cause misunderstanding among them by perpetrators of unrest in the deep South of Thailand.

During their meeting at the APEC summit in Russia, Prime Minister Yingluck Shinawatra and her Malaysian counterpart Najib Razak held talks on security and the economy along the common border of both countries.The issue will be discussed further at the upcoming meeting of the Thailand-Malaysia Joint Commission, to be hosted by Malaysia in October 2012.

The use of technology to check border security will be a major topic of discussion, in order to ensure safety for tourists. Other issues to be discussed include the problem of dual nationality, the upgrading of local people’s living standards, and efforts to increase bilateral trade and investment.Both Thai and Malaysian leaders stressed that they would work closely together in easing unrest in Thailand’s southern border provinces.

Prime Minister Najib expressed Malaysia’s support for Thailand’s approach to the resolving of southern conflicts through peaceful means and development projects.In this connection, Prime Minister Yingluck informed the Malaysian leaders about the progress of Thailand’s southern development. For instance, the Thai government has increased both funding and personnel to develop education and generate employment in the southern border provinces.

She said that, as close neighbors, both sides should meet more frequently to exchange views on how to cope with violence in the deep South and improve the local economy, especially the development of the Sadao area on the border of Malaysia in Songkhla province, in order to increase trade and tourist arrivals in both countries. This would also contribute to the ASEAN economy as a whole.

Speaking in the “Yingluck Government Meets the People” program on September 8, Prime Minister Yingluck stated that the tackling of the southern situation would take time, since the issue was sensitive and complicated. She said that the Government had adopted His Majesty the King’s wise advice to “understand, reach out, and develop” as the principal guideline for dealing with the southern situation.

The Prime Minister recently visited Narathiwat province to boost the morale of local residents and get first-hand information from local religious leaders and members of civil organizations, as well as officials from the Internal Security Operations Command and the Southern Border Provinces Administrative Center.She said that representatives from the Bureau of Budget and the Office of the National Economic and Social Development Board had also joined this trip, since the Government takes care of both security and development in the deep South. So officials from all agencies must give a helping hand and support the Government’s efforts to ease southern problems.

via Inside Thailand — Thailand and Malaysia to Hold Talks on Border Security.