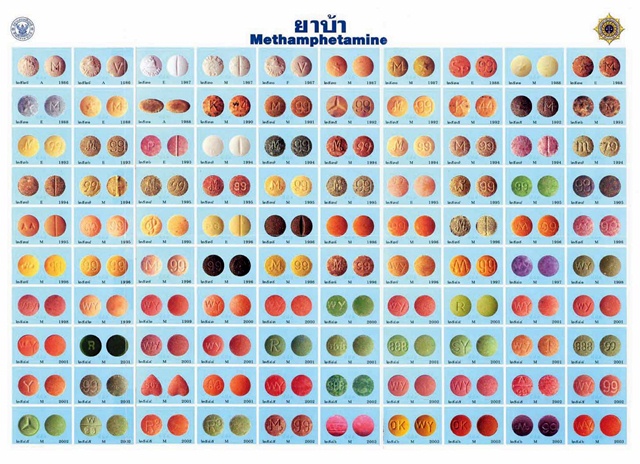 Amphetamine‐type stimulants (ATS) have emerged as the primary illicit drug threat in several East and South‐East Asian countries, displacing plant‐based drugs such as heroin, opium and cannabis, says a report issued today by the United Nations Office on Drugs and Crime (UNODC). According to the UNODC 2011 Global ATS Assessment, the number of methamphetamine pills seized in South‐East Asia quadrupled from 32 million in 2008 to 133 million in 2010.

“East and South‐East Asia currently accounts for around half of global meth seizures, and the problem is increasing – especially in our region,”

“The expansion of the ATS drug trade and the associated high criminal profits pose an increasing threat to security and public health in our region.”

In four countries of the Greater Mekong sub‐region – Lao PDR, Myanmar, Thailand and China – there was four‐fold increase in meth pills seized from 32 million to 133 million in just three years between 2008‐2010. At the same time, the amount of ATS produced in the region has increased dramatically. Using the proxy indicator of laboratories seized, the number of ATS labs seized in South‐East Asia rose from 49 in 2005 to 458 in 2009.

“These drugs are affordable, easy to manufacture and highly profitable for criminal groups,”

“In our region, ATS are often associated with a modern and dynamic lifestyle. Users don’t face the sort of stigma associated with “old‐fashioned” modes of drug administration such as injecting or smoking. This demand offers criminals entry into fresh and lucrative markets.”

In four countries of the Greater Mekong sub‐region – Lao PDR, Myanmar, Thailand and China – there was four‐fold increase in meth pills seized from 32 million to 133 million in just three years between 2008‐2010

Possibly for these reasons, the ATS market has now become established to the extent that by 2009, ATS ranked among the top three drugs of use in all countries of South‐East Asia. While China, Myanmar and the Philippines remain the major ATS manufacturing countries in the region, the Assessment notes that other South‐East Asian countries – including Indonesia and Malaysia – are now reporting the manufacture of crystal methamphetamine and ecstasy.

The Assessment also identifies new ATS trafficking routes such as along the Mekong River embracing Myanmar, Thailand, China, the Lao People’s Democratic Republic and Cambodia. It points to increased inter‐regional trafficking towards East and South‐East Asia by organized criminal gangs from West and East Africa as well as the Islamic Republic of Iran.   The Assessment, which provides a global overview picture as well as separate regional segments, indicates that ATS are now the world’s second most widely used illicit drug after cannabis.

At the global level, the Assessment covers the expansion of ATS manufacture to new regions such as Africa and Central and South America, and the rapidly shifting pattern of ATS trafficking, the emergence of methamphetamine in Europe. It also describes the trend towards injecting ATS use in some regions and the increasing availability and use of analogue substances in established ATS markets.For example, West Africa, a region once largely unaffected by the illicit manufacture and trafficking of ATS, has now been drawn into the trade.

In addition, methamphetamine trafficked from the Islamic Republic of Iran to countries in Asia and Oceania has become an emerging concern in recent years, as indicated by the significantly increased number of Iranians arrested in the region for drug trafficking. The Assessment concludes that tackling the ATS problem will require investments to provide accurate and timely information, particularly in emerging markets as well as effective law enforcement cooperation and improved access to evidence‐based prevention and treatment programmes.

One plank in this response has been the monitoring system – called the SMART (Global Synthetics Monitoring: Analyses, Reporting and Trends) programme, which started 3 years ago. “Knowing the extent and nature of the problem is absolutely critical. Otherwise precious assets are wasted,” Mr. Lewis says. “We need to expand SMART to other parts of the globe which are witnessing the ATS problem for the first time. Many countries lack the infrastructure to collect data on ATS, and yet are increasingly threatened by production, trafficking and use of ATS.”

Related Topics:drugsunited nations
Up Next