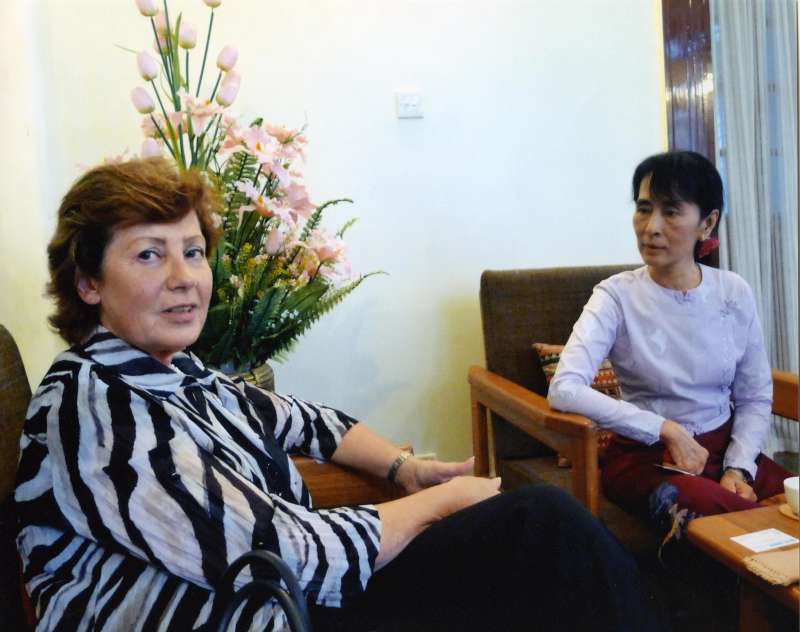 Erika Feller, the UN refugee agency’s most senior protection official, recently paid a significant visit to Myanmar, where UNHCR has operations in Rakhine state in the west, and in the south-east of the country, where displacement along the Mynamar-Thai border is an issue.

UNHCR estimates that northern Rakhine state hosts some 750,000 Muslim residents without citizenship. Independent observers have noticed important openings for humanitarian operations in Myanmar since the forming of a new government late last year.

For the Assistant High Commissioner, this was reflected in more open and productive meetings with ministers and other senior officials and the permission given her to meet opposition leader Aung San Suu Kyi. Feller spoke to UNHCR public information officers Babar Baloch and Leo Dobbs about her trip: Excerpts from the interview:

Why did you go to Myanmar at this particular time?

My trip to Myanmar was, in a sense, a follow on from a trip I made earlier in the year to Thailand. The focus of the Thailand trip was the border camps, which are hosting a large number of refugees from Myanmar. There’s a growing sense that there are many opportunities that did not exist before to find, or more actively promote, solutions to this protracted refugee problem – solutions which should eventually enable the closure of the camps. We wouldn’t have talked about this a year or so ago.

Why is that happening?

There is a new government in Myanmar and that government has made very important overtures to the international community and, more importantly, to its own people since it came into office. There have been some extremely positive signs that things are changing in Myanmar. We have seen the release of political prisoners; we have seen reform of the electoral laws; we have seen reform also of labour laws; and the creation of a national human rights commission. All of these are significant steps away from the policies of the past government. They collectively represent, in our view, an opening up to international concerns and they create opportunities for us to develop further our relationship with the new government and to put in place programmes supporting and leading to sustainable return for people outside Myanmar.

What about your talks with government officials?

The tone of the dialogue was upbeat. The people I met were responsive to the quite modest requests that we came with, including the extension of our memorandum of understanding with the government on our operations in north Rakhine state. I left Myanmar believing that it will happen. We also looked at the possibility of stabilizing our presence in the south-east of the country. I think there was support for maintaining a continuing international UNHCR presence. We talked a little about loosening up the administrative requirements for UNHCR staff to travel, to get entry visas. There was certainly a preparedness to look at this, which is also positive.

We had a more general discussion about the situation of people in northern Rakhine state who from our prospective should be viewed as actually or potentially stateless. Our goal is to work with the authorities to find a path for these people leading to full citizenship of the country. I have had many discussions in the past with delegations from Myanmar on this issue. I think these were the most positive to date. We hope that path is starting to appear.

How did this compare to your previous visits to Myanmar?

I left with certainly more optimism, certainly more enthusiasm about the possibilities for UNHCR projects and UNHCR activities in Myanmar working together with the government. There are signs of real change . . . I came away with a feeling that there might even be an end in sight to the protracted refugee situation.

The situation in Myanmar is undoubtedly be influenced by the outcome of the first elections in 20 years, in November 2010. The first quarter of 2011 is expected to be a period when the humanitarian and development community establish a dialogue with the evolving administrative structures of the new Government. UNHCR is hopeful that it will be able to build on its existing agreements for operations in Myanmar’s northern Rakhine State and in the south-east of the country during this period.

In northern Rakhine State, interventions by the authorities, with UNHCR’s support, following the severe flooding in mid-June 2010 and a subsequent focus on infrastructure development, were positive moves by the Government in this region, which hosts 750,000 Muslim residents without citizenship. The increase in the number of temporary registration cards being issued to this population and their participation in the elections could be seen as first steps by the Government towards addressing their status.

Is ASEAN Moving too Fast With Burma?