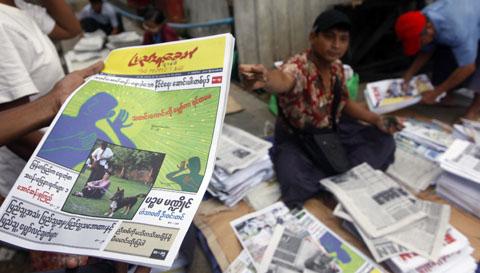 Reporters Without Borders and its partner organization, the Burma Media Association, hail the release of a number of journalists and bloggers under an amnesty announced today.

“We are pleased to see the government continuing to advance in the right direction and we urge it to release all the other detained journalists and Internet users, including eight other DVB video-journalists. Once all the detainees have been freed, we hope the government will also address the need for reforms and the need to end censorship in Burma.”

According to DVB, today’s amnesty was carried out under article 401 (1) of the code of criminal procedure, unlike previous amnesties, which were issued under article 204 de la constitution. This suggested that today’s amnesty did not have the approval of the influential National Defence and Security Council, DVB said.

Myint Hlaing, a media assistant who had help Hla Hla Win on many occasions and was arrested with her in 2009, was also freed.

After leaving prison today, Sithu Zeya said: “As for the president, I think he’s pretty decent as he is [enacting reforms] under a lot of pressure. But also it depends a lot on the men behind him – just one decent person won’t make the change happen. We need all-inclusive cooperation from both sides to build a democratic system.”

The blogger and comedian Zarganar was freed from Myitkyina prison in the northern state of Kachin on 12 October under an earlier “general amnesty.” Three other DVB journalists were released in late December.

Reporters Without Borders continues to support DVB’s “Free Burma VJ” campaign for the release of all of the DVB video-journalists arrested after covering the 2007 Saffron Revolution and the aftermath of Cyclone Nargis in 2008.

Eight DVB journalists are still being held. Reporters Without Borders is also awaiting news about the blogger Kaung Myat Hlaing(also known as Nat Soe), who has been imprisoned since April 2010, and the following journalists: