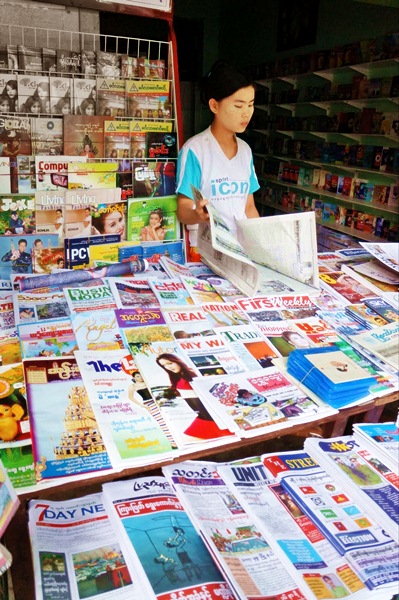 For many foreign governments and human rights groups, the by-elections in Myanmar are an important test for assessing the commitment of the Thein Sein administration to democratic reforms. Free and fair election and press freedom will be indicators of the president’s ability to overcome factional divides in the government and persuade conservatives to accept his leadership.

Ahead of a landmark election, Yukari Sekine reports on the notoriously repressive country’s first steps toward greater freedoms for the press.

Standing outside Nobel Peace Prize winner and current NLD contender for a seat in Myanmar’s Parliament Aung San Suu Kyi’s residence, freelance journalists discussed in the nearby teahouse the changing media landscape in Myanmar. “Before, if we walked around the city with our cameras, we would be approached, and asked: what are you doing, what are you taking pictures of?” said Tom, a local independent multimedia journalist.

“They were afraid of cameras. Now, they are used to it”, he joked. The international media came in scores to see the much talked about National League of Democracy leader’s speech this Friday before the by-elections on Sunday. Hundreds were granted visas in the last few days to be present for the voting. But Tom will still not write his email address on his business card, only his phone number.

“Things have changed a lot in the last six months”

While discussing communication in the country, he explained that SIM cards here cost 20 dollars for foreigners and expire in one month, whereas cards were still inaccessible for locals, costing about 200 dollars. It is still an improvement though, considering a few years ago it would have cost about 2,000 dollars for the local buyer. “Things have changed a lot in the last six months”, says his colleague.

They pointed out that during Suu Kyi’s house arrest until 2010, her street was completely closed off. This was a big contrast to the intense traffic flowing this Friday and the large number of people sitting and waiting in front of her house during the event. Another Greek freelance photographer who has been to Myanmar many times since 2006, talks about how things have changed in the last few years.

“People would be afraid to talk to you, and only in private. Now they are talking more”.

About photographing on the streets, she said

“back then, if I returned many times to photograph in the same place, people would come to ask me. It is difficult because I am compromising the people there. They are afraid. For me, it is ok, I am a foreigner. But for them, it is not.”

Although she considers things are changing fast, she still arranges meetings at a different place every time with her Burmese friend, a lady who has helped her many times and has also been her translator. About the economic developments, she observed: “in the past, you wouldn’t see these new taxis”, referring to the yellow and red cabs that now circulate the streets of Yangon together with the worn-down Toyotas.

A few new buses can also be seen in the streets, alongside the old ones in the town that one Brazilian tourist described as “resembling Cuba”.

Myanmar seems to be opening up to the outside world and the government apparently loosening its previously tight control over the media, and this week journalists from the local and in-exile media expressed mixed views about the promises made by the government of president Thein Sein at a panel discussion at the Foreign Press Club in Bangkok.

Representatives of the Myanmar media had been invited to discuss the draft of a new press law between March 19th and 20th with UNESCO’s collaboration, in Yangon, in a sign that the military authorities in the country are, even if just apparently, loosening its control on press.

The by-elections of April 1st for 45 of the country’s 664 seats in Parliament, in which Aung San Suu Kyi will be running for the NLD will be a test for the promised reforms.

Thiha Saw, an experienced journalist based in Yangon, for Open News Weekly Journal and Myanmar Dhana Business Magazine, contrasted the restrictions imposed on journalists for the 2010 general election, which was widely regarded as a sham by both domestic and international communities, and the current polls.

“We expect greater transparency and greater freedom for the press”, he said. “It is important because the Western community will be watching”,

pointing to the government’s need to have sanctions, particularly by the United States, lifted.

“In 2010, media was controlled and journalists needed licenses for everything”, he said. “Journalists were restricted to observing only specific voting poll stations chosen by the government. It was like going on a guided tour by the military.”

With the presence of international observers and the access to any poll station by local journalists, he hoped this time there would be greater transparency. Burmese journalist Toe Zaw Latt, from in-exile media Democratic Voice of Burma and who returned to his country after almost 25 years for the conference emphasized the need for media development in Myanmar, since the country is still behind in qualified media experts and infrastructure.

Aung Zaw, editor of the in-exile The Irrawaddy, expressed caution about the proposed changes by the government. Following a few days’ visit to his country after 24 years being forbidden entry, he was wary of the recent moves toward reform. As with other exiled media outlets, he was invited to return base to Myanmar, but has considered the invitation with caution.

Restrictions and censorships still exist, and the government has only granted “a longer leash” to journalists, he says.

The promise by the Minister of Information Kyaw Hsan to abolish censorship, in which, in theory, articles would no longer have to be passed by the Press Scrutiny and Registration Division was met by Zaw with concern that another censorship mechanism would assume its place. Self-censorship in the media still remains and certain topics are still not openly discussed in print media, such as the 2007 Saffron Revolution, says Thiha Saw.

“A picture may now be published of Aung San Suu Kyi, but for example, a picture showing her with a huge crowd was censored”.

Although the new draft law relaxes restrictions on pre-publication censorship, it has not yet guaranteed the journalists will not face repercussions after publication.