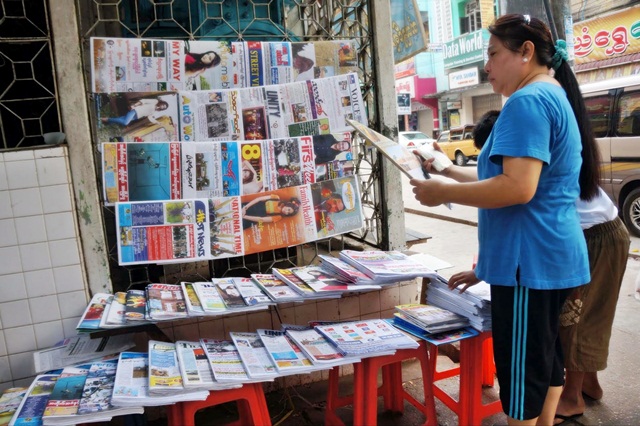 On the TV here in my hotel room, the soldiers are marching again. They’re presenting each other awards of some kind, and doing worthy things for the people, and giving speeches from podiums – and then they march some more. (They love to march.)

Every now and then there’s a cut to the newsreader, a middle-aged woman with a stony face who intones her text, North Korea-style, against a poorly painted background depicting some monumental cityscape.

Today you can walk out of your hotel room and find newsstands filled with dozens of newspapers and magazines that weren't there a few months ago. Picture: Yukari Sekine

Then we’re back to the news: The tractors are bringing in a record harvest, the ethnic minorities are dancing happily in their quaint costumes, and the president is solemnly greeting a visiting dignitary with state honors that never seem to end.

I can’t understand what anyone’s saying, since I don’t speak Burmese, but I sort of have the feeling that it doesn’t really matter anyway. It’s enough to read the English-language version of the government newspaper in my hotel. Yesterday’s headline: “To possess high defense power, state, people, and the armed forces will have to join hands.”

These things are the same as they were when I last visited Burma five years ago. They continue to exist. What’s different now is that something else has been added. Today you can walk out of your hotel room and find newsstands filled with dozens of newspapers and magazines that weren’t there a few months ago

“President U Thein Sein in his address to the Union Government on 31 March 2011 made it clear that new laws and rules should not be an obstacle to the fundamental rights of citizens; instead, they should serve as mechanisms for correctly exercising the fundamental rights of citizens without harming the interest of the’ state and society. We are not drafting the new media law with the intention of banning or hampering press freedom. Our aim is to facilitate the proper use of press freedom for the long-term progress of Myanmar’s media sector.”

The Minister acknowledged that many challenges are ahead of Myanmar and recognized the importance of sharing experiences and lessons learned from the international community to facilitate media reforms.

“The media have a responsibility to facilitate two-way communications between the government and the people. They inform the people of various policies, plans, decisions and actions of the government. They also provide a platform for people to air their opinions, discuss their needs and speak up against wrongdoings – thereby contributing to good governance. However, in so doing, the media must carry out their duties ethically.”

The two-day conference was divided into six sessions structured around the UNESCO Media Development Indicators. About 20 renowned journalists from Myanmar and overseas were invited to speak.
Kavi Chongkittavorn, Chairman of Southeast Asian Press Alliance (SEAPA) from Thailand said:

“For media to contribute to democracy in an ASEAN and global context, they must be independent, the media ownership is transparent and a clear code of conduct must exist. The media must be an independent source of information for citizens, a platform to communicate, and fulfill a watchdog function – as stated in UNESCO’s media development indicators.”

The six sessions included: Media as a Platform for Democratic Discourse; Media Legislation and Regulation; Media Pluralism and Business Sustainability; Professionalism and Capacity Building; Media Associations and Collective Responsibilities; and Media and Peace Building – Role of Media in Peace Negotiations.

Reporting about the current project of revising the country’s media laws, U Ye Htut, Director-General, Information and Public Relations Department, Ministry of Information summarized the Government’s two track strategy of first preparing a new print media law and second providing gradual relaxation in order to prepare for a new media environment. U Ye Htut also identified the main challenges in lack of experience, lack of professional standards in journalism in Myanmar and limited access to local media, and need to imbue press, publishers and editors with a concept of self-responsibility.

“The media is not just a business but has public interest responsibilities. Part of that public interest is to reflect the diversity of a nation. Diversity can be reflected in the way in which the ownership and the control of the media are regulated to ensure that there is a plurality of voices and interests.”

The event was co-organised by Myanmar’s Ministry of Information and UNESCO in partnership with the International Media Support and Canal France International.