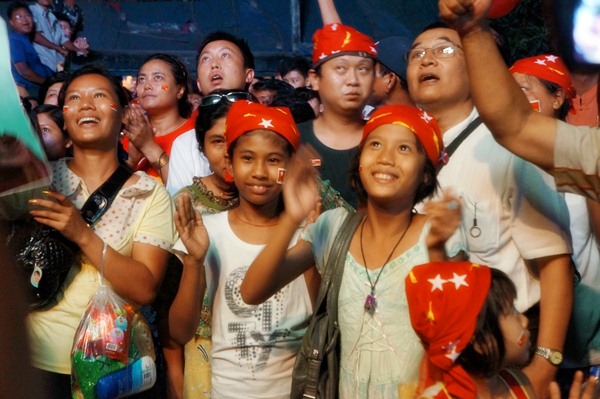 Last week was an exciting and historic time for Myanmar, a country that has been in international isolation for nearly a quarter of a decade. On April 1, the Myanmar government launched two important and far-reaching political and economic reforms: the holding of landmark by-elections, which has been described by foreign observers as free and fair, and the introduction of a managed float of its national currency, the kyat, which symbolically put an end to the old economic system and management based on heavy state intervention and control.

Both reforms were received with a great sense of excitement and enthusiasm by the people of Myanmar, who had longed to see their nation back on a path of parliamentary democracy and a market-based economic system. For the international investor community, the reforms also demonstrate a serious commitment by Myanmar authorities to rapid political and economic changes so that their country can quickly reintegrate itself with the global economic community after long years of international absence.

A historic opportunity is now unfolding in Myanmar. This opportunity, if properly harnessed, will have a tremendous positive long-term impact on Asia and the rest of the world. With a population of over 60 million people, vast and abundant natural resources and a young labour force, the future economic role of Myanmar as an open trading nation is potentially significant. Picture: Yukari Sekine

I was fortunate to have been in Myanmar last week to witness both events. In the past, successive attempts at market reform in Myanmar had been hampered by macroeconomic instability, which forced the authorities to revert back to state control and economic deterioration. This time, the reform process looks more sustainable as political and economic reforms simultaneously carried out are likely to be mutually reinforcing. More importantly, both the government and the opposition seem willing to work together and adhere to a parliamentary process as a way of organising future reform. The palpable sense of shared responsibility is particularly encouraging.

It effectively removed a key distortion in the economy, making upholding macroeconomic stability during the reform process more assuring. In contrast to the reform efforts of the 1990s, the current market reform seems to have been more carefully organised, with a number of liberalisation measures phased in prior to April 1 to prepare financial markets and the economy for the eventual key policy change.

So far, market adjustment to the new foreign exchange regime has been orderly, which should provide a market environment conducive for introducing other reforms and liberalisation to strengthen the working of a market-based economy.

At this time, the planned liberalisation of foreign trade and investment regime and the reform of the domestic banking sector are top of the reform agenda. Unlike the earlier reforms, the current market reform is being supported by institution building and legal reform, both crucial for ensuring the reform’s continued success in the longer term. The latter includes the drafting of a new foreign exchange regulation act to replace the outdated 1947 act and a new central bank act that will turn the Central Bank of Myanmar into an independent central bank with authority to conduct monetary policy and supervise the domestic financial system as a fully-functioning central bank.

With a reform agenda more or less in place, sequencing the reform and making it happen in a way that meets the expectations of the private sector in Myanmar and foreign investors and governments will be a key challenge for Naypyidaw. By all counts, this will be a herculean task considering that less than a year ago Myanmar was still very much a closed, cash-based economy with heavy state intervention. But to have come this far in such a short period to exchange rate unification is in itself a remarkable achievement. It reflects clearly the determination of Myanmar authorities to push forward with economic liberalisation and reform.

Nonetheless, the road to a reformed market-based economy is a long and arduous one.

And given Myanmar’s long years of absence from international trade and investment systems, three things will be crucial in ensuring a successful return of Myanmar to the global economic system and hence the success of its market reform.

The first is a careful design of the future reform efforts _ in terms of sequencing and coverage _ so that the reform focuses on the most important issues while the pace of reform is structured in a manner that the economy can move quickly and safely forward given the complexity of the modern global economy and financial markets. To accomplish this, Myanmar will need the support of all concerned to help foster a positive reform outcome, not least to reduce the risk of the macroeconomic instability which derailed past reform efforts. In this regard, support from the international economic community will be vital to help Myanmar strengthen and nurture the return of the private sector back to a market-based economic system.

The second and most immediate concern is the lifting of economic and financial sanctions imposed on Myanmar by Western nations. Because of the prohibitions on trade and international payments transfer associated with the sanctions, Myanmar has been practically reduced to a cash-based economy, especially when it comes to transactions in foreign currencies.

In addition, economic sanctions have significantly limited the country’s access to international assistance that can be offered by foreign governments and international organisations, while financial sanctions confine the scopes of the domestic banks in Myanmar to local activities, thereby limiting their contributions toward supporting the country’s international economic activities. Removing sanctions is therefore the key ingredient for the success of Myanmar’s newly launched market reform.

The third is capacity and institutional building, both in government and in the private sector. This is crucial if Myanmar’s market reform is to succeed and to unleash the pent-up entrepreneurial energy and spirit of the country’s private sector. Integral to this is education reform that will help build the next generation of public and private sector personnel equipped with the capacity to manage the complexities of a market economy in the modern world. All this support is very basic and can easily be provided by an accommodating international economic community.

A historic opportunity is now unfolding in Myanmar. This opportunity, if properly harnessed, will have a tremendous positive long-term impact on Asia and the rest of the world. With a population of over 60 million people, vast and abundant natural resources and a young labour force, the future economic role of Myanmar as an open trading nation is potentially significant.

Last week the government and the people of Myanmar have delivered. The ball is now in the court of the international community.

Bandid Nijathaworn is the former deputy governor of the Bank of Thailand. He is currently chairman of the Thai Bond Market Association, and president and CEO of the Thai Institute of Directors.