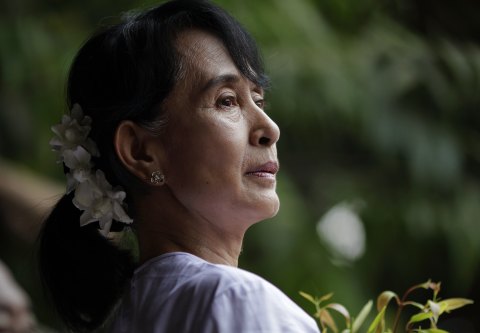 Burmese opposition leader Aung San Suu Kyi said Monday she and her fellow opposition lawmakers have ended their boycott of parliament and will pledge to “safeguard” the constitution, accepting a term that created the dispute.

Aung San Suu Kyi and other members of the National League for Democracy party will attend Burma’s parliament for the first time Wednesday. They had objected to the words “safeguard the constitution” in the swearing-in oath, and wanted them replaced with “respect the constitution.”

But, the Nobel Peace laureate said the NLD members are yielding to “the desires of the people” who elected them to parliament and who have been upset the lawmakers had not taken their seats in the legislative body.

Aung San Suu Kyi’s decision meant she was not present in parliament Monday in the administrative capital Naypyidaw to witness the landmark speech by visiting U.N. Secretary General Ban Ki-moon – the first such address by a visiting foreign dignitary.

Before his address, the U.N. chief met with Burmese President Thien Sein in a show of support for the sweeping changes in the long-isolated state. The visit is Ban’s first trip to Burma since the government introduced a series of political and economic reforms over the past year.

Some information for this report provided by AP, AFP and Reuters.