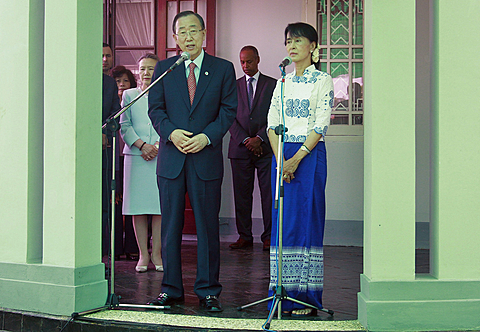 The meeting came at the end of Ban Ki-moon’s three day trip to Burma.

When he last visited Burma in 2009, the country’s military government refused to allow Ban to meet with Aung San Suu Kyi, who at the time was nearing 15 years under house arrest.

“It’s a great honor for me to finally have face-to-face meeting with Daw Aung San Suu Kyi,” he said. “It is not the lack of my trying, but simply that it didn’t happen and they didn’t allow.”

His visit to Burma this week coincided with a key political decision for the country’s newly elected opposition members, including Aung San Suu Kyi.

Her National League for Democracy party wants to amend the constitution and had initially refused to take an oath to safeguard the military-drafted constitution.

“Politicians will sometimes continue to have differences of opinion on some issues, but a real leader demonstrates flexibility for the greater cause of the people of a country,” he said. “And this is what she has done.”

The stand-off had threatened to prevent the NLD members elected in April from joining parliament.

Aung San Suu Kyi told reporters the decision to take the oath did not indicate any new change of tactic.

“We have always believed in being flexible throughout the years of our struggle, because that is the only way we can achieve our goal without violence,” she said. “So I do not think flexibility is going to be a new concept for us, newly acquired because we’re going into the National Assembly. It has been part of the political equipment with which we have been working for the last 23-odd years.”

Ban said he invited Aung San Suu Kyi to visit U.N. headquarters in New York City at a convenient time and that she reacted very positively.

The U.N. chief met Monday with President Thein Sein and was the first foreign leader to address the new parliament.

Ban praised the reform-minded president and urged a further roll back of western sanctions to support reform efforts.

He said Tuesday, despite challenges, there was no turning back on Burma’s reform process.

The European Union last week suspended all trade sanctions, except weapons exports, for a year after similar moves by Australia and Canada.

The United States has been more cautious, removing only some limits on financial services and humanitarian aid while maintaining sanctions on trade.

New Myanmar and opportunity for Thailand