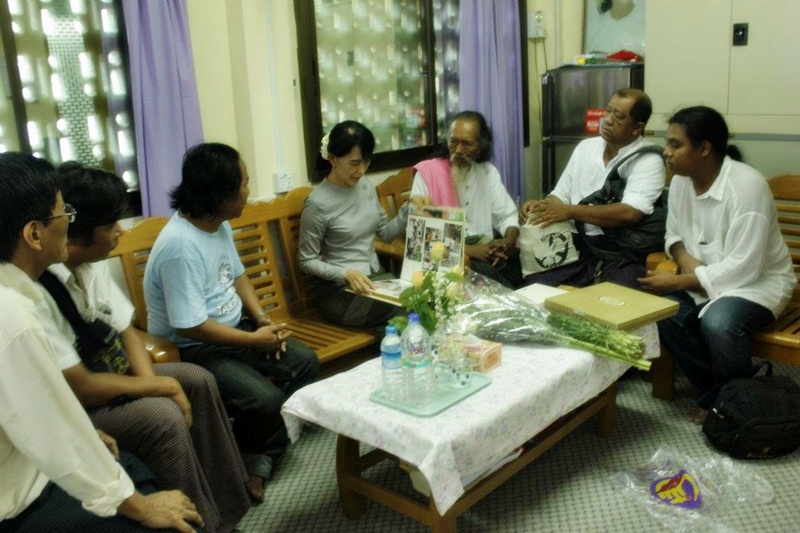 While President Thein Sein has been declaring publicly that he will not change its reform-course to backward direction, Burma Army has been constantly deploying more troups in areas held by Kachin Independence Army, military-wing of the Kachin Independence Organization (KIO).

The Kachin Independence Organisation have recently accused the Burmese army of participating in ethnic cleansing and have asked the United Nations to intervene in the conflict, as the international body prepares to deliver aid to refugees in the northern most state.

Yukari Sekine has a story about how Kachin refugees got help through a Burmese band, and met with Aung San Suu Kyi last week to transfer the donations.

Country music may not be the most popular in Myanmar, a nation that has long been closed off from Western influence, but some Burmese musicians have joined talents in their own version of country-style music to help the victims of the conflict in Kachin state. Playing at local teashops and on the streets, they have been collecting donations for the refugees that have been displaced by the fighting between government troops and the Kachin Independence Army (KIA).

The band is called Pann Ye Lann, meaning “The peace of flower road”

and is formed by renowned musicians such as local legend bass guitarist and composer U Ye Lwin and Ko Thar Htwe. They have come together this year after fighting broke out last June in the northern Kachin state, which borders China. The confrontations put an end to the 17-year ceasefire agreement that was signed in 1994 between the Burmese military and the KIA.

Crowds numbering up to a few hundred have gathered to watch the shows. Most donators are common people, and the band has now collected close to 120 million kyat (approximately US$ 140,000).

In the next few days, they will visit the townships of Kha Yan (at least 70 miles from Yangon), Thoung Gwa and Thanlyin. The roads are often bad to travel for the two or three small trucks, but the band is motivated and will probably go on tour in June.

“We are all playing on the streets and tea shops to collect the donation money like beggars. That’s the first time in Myanmar. Nobody has ever done this”, says Peter Aung, also a musician and one of the organizers of the campaign.

He has followed the band and is responsible for updating their Facebook page with videos and photos.

“Most of the singers and players are famous people and some of the members have their own business. We all left our standard and dignity behind and we are all doing this for our people, who have suffered in the jungle. We care about them and we want to let the government know we have very bad refugee situation in our country “, he said.

The band members met with Aung San Suu Kyi last week to transfer the donations to her. She will then transfer the money to the Kachin Roman Catholic Church and Baptist Convention Center, organizations that have been helping the refugees on the border with China.

“Daw Aung San Su Kyi really appreciated our movement because what we did is very good for basic standard people, and we are carryinjg the message directly to them”.

The band has made T-shirts for the campaign and walk around with sign boards to promote their “Stop War” message.

The Kachin region has been of difficult access for humanitarian aid, as the military government has been strict about the entrance to non-government controlled areas. There are approximately 50,000 to 70,000 displaced people due to the conflicts in the area, according to the UN and Human Rights Watch,

The Pann Ye Lann members are worried about the grave humanitarian situation faced by the IDPs (internally displaced people), especially with the coming rainy season: “One more thing is monsoon is coming. They all will be have more trouble in the jungle”, said Peter.

In a recent visit to Myanmar, UN secretary-general Ban Ki Moon expressed his concern for the ongoing conflict in the region: “the situation in Kachin State is inconsistent with the successful conclusion of ceasefire agreements with all the other major groups. The Kachin people should no longer be denied the opportunity that a ceasefire and a political agreement can bring for peace and development”, he said.

The current government, led by Thein Sein, is negotiating cease-fires with the many ethnic groups in Myanmar, but it has been the least successful with the KIO, the political wing of the KIA. The negotiations with minority groups are meant to show stability and reconciliation, as the country opens up for foreign investments and political leadership in the region.

Although the band’s actions have been monitored by the government intelligence, the Criminal Investigation Department, they are not concerned. “We have been followed by CID and others. They always took the pictures and record what we say to the people. That’s all.”

When asked until when they will continue their campaign, Peter answered: “Until all refugees are back in their right place or home.”

Foreign Investment Will Not Weaken China Economic Ties in Burma