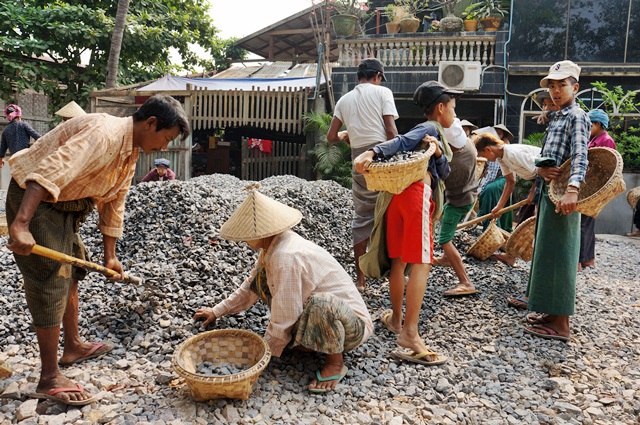 Myanmar has taken obvious steps toward democratic reform after half a century of autocratic rule. Aung San Suu Kyi has been released from house arrest, the April 2012 by-elections were conducted freely and fairly, increased press freedoms have been granted, negotiations are in progress with ethnic minorities and the government is undergoing reform. There has been significant progress, but misgivings and challenges still remain, according to Myanmar speakers at a press conference on Friday.

Among the challenges are the resolution of ethnic conflicts, judicial reform, careful management of foreign investment and the emergence of a multiparty democracy. Myanmar is still viewed by the West with some lack of confidence, and remains as one of the least developed countries in the world, well behind neighboring Thailand.

“There is a need for multi-party democracy,” said Dr. Khin Zaw Win, a former prisoner of conscience in his own country and now director of Thampadipa Institute. He highlighted that there is a diversity of opposition groups in Myanmar and these must be significantly represented in the governing body.

There has been significant progress, but misgivings and challenges still remain, according to Myanmar speakers at a press conference on Friday.

Although the NLD experienced a victory in the recent by-election in April, it was just “a dress-rehearsal” for the 2015 general election, he said.

Aung San Suu Kyi said in an address to the British Parliament this week that “our Parliament is only in its infancy, having been established only in March 2011”.

Although president Thein Sein has widely promoted national reconciliation in Myanmar, negotiating with many ethnic minorities, conflicts remains a hot topic in Kachin, Karen, Shan and more recently, in the western Rakhine state.  While President Thein Sein’s pledges to prioritize ethnic peace have been welcomed, the government has not developed a consistent policy to resolve the country’s ethnic conflicts. Ceasefires have been signed with the majority of armed ethnic forces, but a transparent process towards political solutions has yet to be agreed

Ms. Bawk Ja, who was an internally displaced person in Kachin state when she was young, said the conflicts continue in her state of origin. She was a History graduate in Yangon and returned to Kachin, currently being involved in activism and politics.

A 17-year-old ceasefire with the military broke down in June last year, and this is partly related to the current developments in Myanmar.  Conflicts in the state bordering China have been fueled by what she called “money power”.

“The Chinese are entering the northern region and taking control of the area, paying authorities to get ID cards, and migrating into Kachin”, she said, pointing to the lack of a clear law to control foreign investment in the country.

China has a dam plan

Chinese companies have been responsible for the construction of dams, and land has been confiscated from villagers, who have been threatened and forced to move. Internally displaced people are increasing in Kachin, according to Ms. Bawk Ja, especially in the most remote rural areas. Children cannot study and many are in need of medication and assistance.

Seven more dams are being planned for construction, according to Ms Bawk Ja . She alerted to the high environmental costs of many of these large infrastructural projects. Although the government has claimed “peace” in the region the “civil war” continues.

She also criticized Aung San Suu Kyi for avoiding the discussion about greater autonomy for the ethnic minorities. “Daw Su avoided mentioning federalism for ethnic people, federalism based on the Panglong Agreement of 1947”. The agreement was signed between General Aung San and leaders of the Chin, Kachin and Shan ethnic groups, guaranteeing self-determination to these minorities.

About the recent communal violence in Rakhine state, Dr. Zaw said “the ethnic, sectarian issue is a faultline” in Myanmar’s reforms. He pointed to the underlying resentments, but suggested Myanmar should follow Indonesia’s example in the democratization process and in including different ethnicities into the nationalist agenda. The country also transitioned from authoritarian rule after the fall of president Suharto in 1998.

Ms. Aye Thanda, a practicing lawyer in Myanmar, pointed to the difficulties in the judicial system in the country. Bribery and corruption happen in both criminal and civil cases, and these have contaminated the judicial processes. It has been a huge challenge for lawyers such as Thanda, who acts as a pro bono legal counsel for women who have suffered injustice, to have a voice and do their work effectively.

Thanda ran for the Myittha constituency, in Mandalay, in the 2010 by-election, for the Lower House of Parliament. She advocates judicial and education reform.

One challenge the opposition parties face is the lack of an economic agenda, said Dr. Zaw. In comparing the anti-apartheid movement in South Africa and the NLD in Myanmar’s democratization process, Dr. Zaw pointed that, while the South African movement had an economic agenda, the current NLD lacks a clear economic policy. “All parties are weak on economic policy”, he added, although Aung San Suu Kyi has frequently commented about the kinds of investments necessary in her country during her recent visit to Europe.

Getting economic reform on track

He emphasized that Myanmar youth studying abroad – and there has been a significant “brain drain” in the country since the military junta came to power in 1962 – should try study Economics to help the country.

“There has been no debate about the crisis of capitalism, despite economist Joseph Stiglitz’ recent high profile visit to the country. There is a need for alternative views,” he said.

Other leaders besides Nobel laureate Aung San Suu Kyi must also emerge. “Leaders with diverse backgrounds, as much politically as ethnically, are necessary,” said Dr. Zaw. Ms Bawk Ja emphasized the need for ethnic groups to have their own parties and representation in government.

Despite the challenges Myanmar faces in its new path to democracy, there is definitely light at the end of the tunnel. “These kinds of changes do not happen overnight,” said Zaw. And in comparison to the 1980s, which was marked by the violent 1988 crackdown on students, and 2003, when there was an attempted assassination of Aung San Suu Kyi. The current period is definitely indicative of change.

Time to invest in Myanmar ? Not so fast