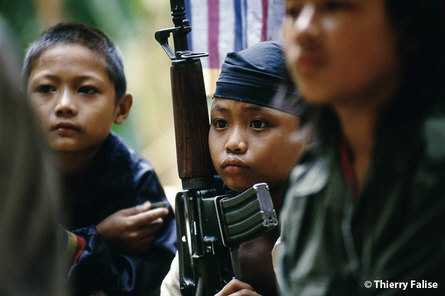 The world is watching with cautious optimism as Burma makes tentative steps towards becoming a more democratic country. Despite the hope that surrounds the transition from military dictatorship to managed democracy and the increasingly prominent role played by democracy icon and MP Aung San Suu Kyi, it is important to not to forget the country’s past.

Burmese Shadows draws on the two and a half decades Thierry Falise has spent covering one of Southeast Asia’s most secretive countries to present an unprecedented body of work, which highlights the everyday struggles many Burmese people have to undergo in order to make a living or simply stay alive.

These harsh realities are juxtaposed against the vibrant cultures and rich traditions which combine to make the enigmatic country that is Burma. Few other illustrated titles can provide such a deep and broad picture of Burmese life and politics.

Falise’s reportage goes well beyond the realms of Rangoon and the popular fascination with Suu Kyi to explore – through unforgettable images – less covered stories of ethnic armies and tribal warlords, humanitarian commandos operating in areas where the Burmese army operates a shoot-on-sight policy, jungle schools, and the key roles that animism and Buddhism play in Burmese society.

At the launch, Thierry Falise will give an overview of his 25 years reporting on Burma, and present a slideshow of photography from the book before opening the floor for questions and answers.

McNidder & Grace, the publisher of Burmese Shadows, will be selling this book at a discounted price at the launch. The event will also formally launch the FCCT’s Burmese Shadows exhibition which runs for the month of September.

Thierry Falise is a Belgian photographer, author and recognised expert on Burma, ethnic insurgent groups and refugee-related matters. He has been based in Bangkok since 1991.

Falise has authored other books about Burma, including a biography on Aung San Suu Kyi, ‘Le Jasmin ou la Lune’ (Florent Massot 2007). He has visited and reported on Burma every year since 1987. For the past three years, Falise has intermittently worked as an expert and consultant on ethnic minorities in Burma for a Switzerland-based foundation. In 2010 he provided testimony on Burma’s complex ethnic issues at the European Parliament – at a meeting chaired by Nobel Laureate and President of Timor Leste, Ramos Horta.