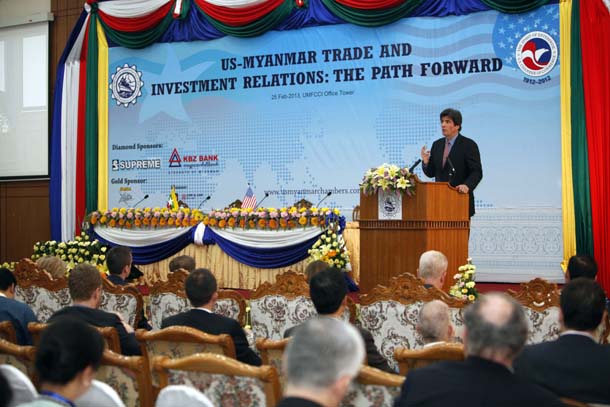 The sudden recognition by Washington of four Burmese banks—one owned by a man accused by the US of arms and drugs trade—appears to have been more than coincidence immediately before a top-level American business team arrived in Rangoon.

It may have eased the handshake meeting on Monday between US Assistant Secretary of State for Economic and Business Affairs Jose Fernandez, and Win Aung, the president of the Union of Myanmar Federation of Chamber of Commerce and Industry (UMFCCI).

Win Aung is on a US government blacklist of Burmese company leaders dubbed cronies of the former military regime who benefited financially from close relationships with army-controlled businesses.

That blacklist got a little whiter just ahead of the visit by Fernandez, who heads up a 50-strong US business delegation in Burma this week. One of the four private banks approved by Washington for use by American business, Asia Green Development Bank, is owned by Tay Za, who in the past has been accused by the US of involvement in weapons, drugs and money laundering, and remains on the Washington blacklist.

Win Aung is boss of the Dagon Group of Companies, which is heavily engaged in natural resource extraction, including rubber and timber, plus construction, property and retailing.

Source: US Business Faces Confused Signals from Washington on Burma | The Irrawaddy Magazine