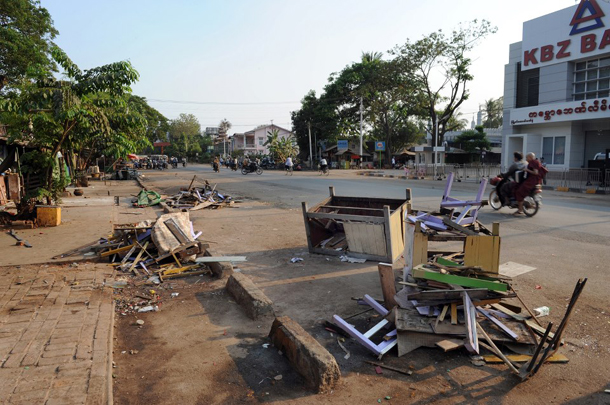 Continued religious and ethnic violence in Burma could deter much-needed investment by fostering a “wait and see” attitude among foreign companies and entrepreneurs, according to a study of the recent spate of anti-Muslim rioting and arson in the country.

“Failure to prevent the spread of sectarian violence could dampen the influx of critical foreign investment,” the briefing on Burma by British business risk consultants Maplecroft said.

The report identifies the booming tourism industry as the most vulnerable, with the negative impact quickly spreading to the retail and infrastructure sectors.

“[Burma] has attracted significant interest from investors since the US and EU pared back sanctions in 2012. However, stakeholders remain cautious about making significant investments in the country, preferring to wait and see how the reform process moves forward,” said Maplecroft’s principal Asia analyst Arvind Ramakrishnan.

“The important oil and gas industry is unlikely to be directly disrupted by the present level of sectarian trouble but it could cause problems for supporting logistical work, such as transport,” the Maplecroft study said. Further widespread violence “could create hazards to personnel operating in the vicinity of riots,” which would be an additional disincentive for commercial development.

The Ministry of Energy has signaled that it plans to hold an international auction this month for up to 20 offshore exploration licenses to hunt for oil and gas off Burma’s coast, where large volumes of natural gas are estimated to exist beneath the sea floor.

Many of these sea blocks are adjacent to the coastal Arakan region where many of Burma’s Muslims live.

The auction has been delayed already, since last September.

Peace and stability in Burma’s commercial capital, where most foreign investor activity is initially concentrated, is seen as key to uninterrupted economic development.

“Due to the economic and cultural significance of [Rangoon], if violence were to occur in the city it would likely spread further throughout the country,” said Maplecroft.

“While the Muslim community is believed to be a very small minority nationally, the US Department of State reported in 2005 that the size of Myanmar’s non-Buddhist population may be grossly underestimated.

“According to the report, the country’s non-Buddhist population may be as high as 20 percent of the total population, rather than the 7 percent reported by the government,” the Maplecroft study said.

“In spite of [President] Thein Sein’s softly-softly official messages of religious harmony and coexistence in society, he has so far done virtually nothing to nip the neo-Nazi Buddhist movement of 969.

“Rather, the impunity and inaction are more likely anchored in Naypyidaw’s strategic calculation to create a general climate of fear and uncertainty, consistent with the divide-and-rule tactics it has always used to exert unrivaled control and influence over the state and economy,” said Maung Zarni in the Asia Times.

Maplecroft said that if the signs of “neo-nationalistic discrimination” spread beyond anti-Muslim sentiment, there is a wider risk to the business community.

“Although the violence has so far been directed at Muslims, the leaders of the 969 Movement have also spoken out against other non-Burmese ethnicities, particularly those of Chinese descent.

“Failure to stop the group’s growing influence could result in foreign-owned businesses being targeted or boycotted. This could have strong implications for extractive industries, as the group’s main accusation against the Chinese is based on their profiting through the export of Myanmar’s natural resources without benefiting the local population.”

Is Burma ready to Be Asia’s Next Economic Tiger?