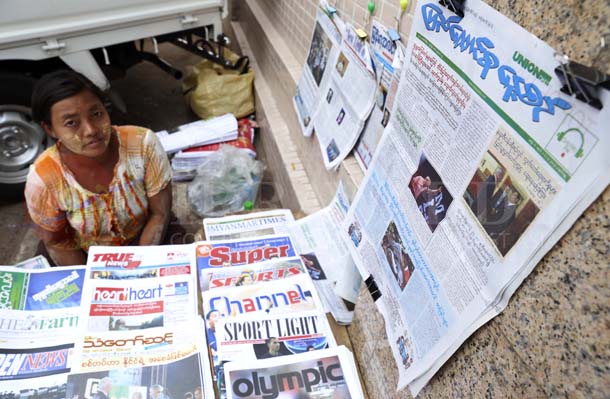 As publisher of one of Burma’s 12 fledgling private daily newspapers, the Yangon Times, Ko Ko has survival on his mind.

“No newspaper is making a profit,” he says, cagey about notions that a news-hungry populace is keen to snap up the array of daily newspapers now on sale, after five decades of a tightly controlled fourth estate.

It’s anyone’s guess how many of the remaining 19 licensees will end up rolling a newspaper off the presses, in what looks like a tough game to be entering. “Circulation for most of the new dailies is between 10,000 and 30,000 a day. If anyone tells you more, they’re lying,” the 51-year-old Ko Ko says.

In a country where the GDP per head is reckoned to be around US$800 to US$1,000, according to the World Bank, most people simply don’t have money to spare. Faced with such low purchasing power, the country’s news media could face a shaky future in which only those newspapers with additional revenue, such as publications run as part of companies with a broader reach, will have the best chance of survival, Ko Ko told The Irrawaddy.

One such outlet is 7Day News, part of Information Matrix, a business that, among other gigs, does IT and website development, including for government clients

That portfolio is a reflection of the background of company founder Thaung Su Nyein, who studied computer science. A son of former Foreign Minister Win Aung, the 36-year-old is at the helm of a multifaceted company based in a plush, airy office in the north of Rangoon—a space likely the envy of fat-walleted transnational corporations struggling to find office locations in what is a strangled, overpriced urban property market.

“Dailies are struggling as an entire category,” Thaung Su Nyein concedes, though declining to divulge sales numbers for 7Day’s daily publication. It could sell more, he says, if Burma’s infrastructure—such as road and rail links—was improved sufficiently to enable timely distribution of the daily to areas outside of Mandalay, Naypyidaw and Rangoon, where most newspaper copies are sold. “It costs so much to distribute. Trucking is very inefficient here, for example,” he says.

The presence of weekly newspapers, or journals in the local parlance, is another hurdle for dailies, says Thaung Su Nyein. “Every day there is a different weekly journal available,” he says. “People are used to them, they are thicker than dailies, and people here associate that with value.”

And though daily newspapers are priced around the 200 kyats (20 US cents) mark—in an attempt to put them within reach of Burma’s millions of low-income earners—Thaung Su Nyein says that news readers are willing to shell out the extra for a weekly rather than try out a new daily. “The dailies lose their impact very quickly,” he explains.

“The weeklies have more in-depth pieces and the content lasts longer, which is another incentive for the newsreader.”

For Burma’s New Newspapers, a Daily Struggle to Profit

Up to 100,000 Burmese workers could face Expulsion From Thailand