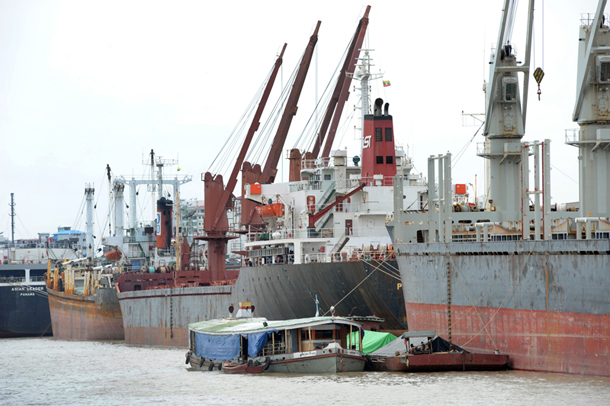 A preferential EU trade scheme has Myanmar’s exporters eyeing the European market with greater enthusiasm, after the 28-nation bloc recently dropped all tariffs and quotas on goods from the Golden Land.

A July 19 decision by the European Commission saw Myanmar reinstated to the European Union’s Generalized Scheme of Preferences (GSP), a program designed to help the developing world prosper by giving poor nations a more favorable trade regime. Myanmar’s designation as a least developed country places it in the “Everything But Arms” bracket, completely removing tariffs and quotas on all exports except for arms and munitions.

The last time Myanmar benefitted from GSP, the ledgers of importing European companies were tabulated in an amalgam of currencies, from francs to lira to pesetas. Sixteen years later, the single-currency EU bloc offers one of the world’s largest markets. With some 500 million consumers now accessible and duty free, opportunities for Myanmar’s exporters have never looked so attractive.

The European Union revoked GSP benefits for Myanmar in 1997, in response to the country’s failure to uphold international labor standards and worker protections under the former military regime. GSP benefits will be applied retroactively from June 13, 2012, when the International Labor Organization (ILO) said Myanmar’s new quasi-civilian government had made significant progress toward rectifying those labor shortcomings.

The European contingent of prospectors to Myanmar is growing, and EU governments are doing their part to encourage business links. The Association of German Chambers of Commerce and Industry plans to set up an office in Myanmar in November. The French in July followed their British counterparts in setting up a trade commission office in Yangon, which will serve as a liaison between French and Myanmar companies looking to do business together.

French imports from Myanmar soared in the first five months of this year, compared with the same period last year. Imports rose 1,260 percent, from 1.5 million euros (US $2 million) to 20.4 million euros, with most of the increase coming from finished jewelry products, according to Dominique Causse, head of the French Embassy’s economic service.

French Trade Minister Nicole Bricq was on hand two months ago for the inauguration of the country’s trade commission office in Yangon.

“She’s the first minister of the French government with economic responsibilities [to visit Myanmar], and she wanted to show that the relationship between Myanmar and France has to be economic and even commercial in nature, not only political,” Mr. Causse said. “It has to be translated into business relations between companies.”

For Myanmar’s agricultural sector, which employs some 70 percent of the country’s workforce, duty-free exports to the European Union could be a major boon. U SoeTun, an executive member of the Myanmar Rice Industry Association, told The Irrawaddy that he expected rice exports to the EU market to increase tenfold this year—though he is quick to point out that the increase comes from a very low base of just 5,000 metric tons shipped to the European Union in the 2012-13 fiscal year, out of about 1.5 million tons exported by Myanmar in total.

The garment sector, which makes up the greatest portion of Myanmar’s exports to the European Union, is equally bullish.

“The opening of the Western markets is a very good opportunity for us, in that we can expand our manufacturing and job opportunities for our country,” said U MyintSoe, chairman of the Myanmar Garment Manufacturers Association. He said he expected garment exports to the European Union to make up 25 percent of the total next year, rising from 20 percent this year, when Myanmar is on track to export $1 billion globally.

This story first appeared in the September 2013 print issue of The Irrawaddy magazine.

Exports Set to Soar, as Europe Opens Its Doors