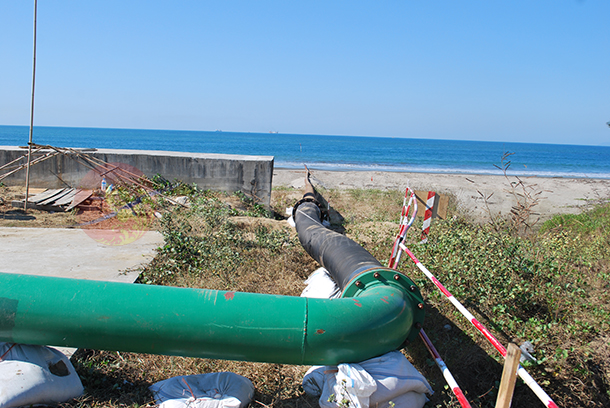 The Chinese oil port at Kyaukphyu on the coast of Burma’s Arakan State, and the cross-country pipeline to pump oil into China’s landlocked Yunnan Province, face a major problem which could delay or slow down their operations.

Almost 50 percent of the 22 million ton a year of crude oil from the Middle East and Africa that is scheduled to begin flowing soon through Kyaukphyu is intended for a new refinery in the Kunming, the capital of Yunnan. But Chinese public opposition and environmental issues have held up construction of the refinery, and some reports now say it might be canceled and forced to move elsewhere.

The refinery at Anning, just outside Kunming, was due to be completed early in 2014, and was supposed to take 200,000 barrels per day (bpd) to make gasoline and diesel and to feed an adjacent petrochemicals plant. The pipeline’s maximum transmission capacity is 440,000 bpd, its builder and majority owner China National Petroleum Corporation (CNPC) has said.

opposing the refinery and CNPC’s plans to produce 500,000 tons of paraxylene (PX), a carcinogenic chemical used in polyester and plastic bottle manufacturing.

CNPC claimed an environmental assessment report found no danger of air pollution to the surrounding urban population, but, in August, China’s Ministry of Environmental Protection announced it was suspending environmental approvals for new refinery projects planned by both CNPC and another Chinese state-owned oil company, Sinopec, “because they had failed to meet their [air pollution] emissions reduction targets last year,” international energy analysts Platts said in October.

Until now, it was unclear what would happen to CNPC’s Kunming refinery project, but last week a diplomat at China’s Burma Embassy was quoted saying it was being relocated.

“It is not known when operations [of the Burma oil pipeline] will begin because the construction of an oil refinery has been delayed,” Embassy Third Secretary Huo Wenjun was quoted by the Myanmar Times. “First the refinery was to be built in Kunming, but now it will be elsewhere in Yunnan province.”

CNPC in Beijing declined to speak to The Irrawaddy about the refinery delay and its implications for the pipeline and would only make this brief statement: “Preparations are still being made to begin the operation of the oil pipeline in 2014.”

CNPC is also building oil storage tanks at its Kyaukphyu transshipment terminal, according to the local NGO Kyaukphyu Social Network.

There will be 12 tanks each with a capacity of 100,000 cubic meters, according to a report by Reuters in May. That would provide storage for up to 7.5 million barrels, or the equivalent of 17 days operation of the pipeline at full capacity.

“In theory CNPC could just ship the oil coming through the pipeline on to other destinations in southwest China,” regional oil and gas industries analyst Collin Reynolds in Bangkok told The Irrawaddy. “The problem with that is that pipeline infrastructure within Yunnan is still limited.

“Unless CNPC can quickly shift oil pumped through the Myanmar [Burma] pipeline there could well be a logistics backlog at its coastal terminal,” he said.

The Kunming refinery was meant to supply more than 50 percent of the city’s gasoline and diesel needs, and feed other cities in Yunnan Province which at present have to import fuel oils from other Chinese provinces.

Meanwhile, the Kyaukphyu Social Network is campaigning for information on safety measures to prevent or limit an oil spill at Kyaukphyu and surrounding coastal waters, as well as the return of access to fishing grounds which are now barred to the local community.

“The Network has requested information from the President’s [Thein Sein’s] office, CNPC and the China Embassy on the issue of an oil spill but so far there has been no response,” Naing Htoo of Washington-based Earth Rights International’s Southeast Asia office told The Irrawaddy.

The CNPC Burma pipeline is the first to pump oil into China that is not linked directly with a field. The added cost of bringing the crude by ship to Kyaukphyu before offloading and transferring make it an uneconomical operation, said the Beijing business magazine in Caijing in a special report.

In addition, CNPC is supposed to pay the Naypyidaw government US$13.6 million per year “rent” for the pipeline, plus US$1 for every ton that flows through it. That’s US$22 million—but only if it operates at full capacity.

This article is from: